Stories and images are a very compelling way to take in the world. Given its importance in the modern world, the place of science as a discipline and as a curriculum can be broadened and boosted through science comics. 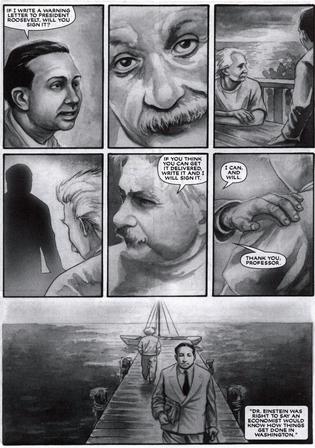 The nature and history of science is replete with epic battles and pursuits of glory and prestige, with its own cast of heroes and villains who go through inner turmoil, emotional outbursts, creative flourishes and endure sacrifices. 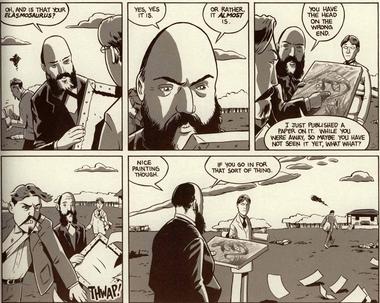 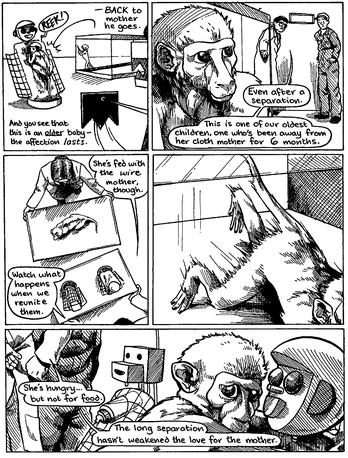 The Cartoon Guide to Genetics by Larry Gonick & Mark Wheelis

The Cartoon Guide to Genetics by Larry Gonick and Mark Wheelis

Below is a growing list of science comics / graphic novels that may be useful to the science teacher who is interested in infusing science-technology-society themes without excessively trading off the disciplinary focus. Links to the disciplinary content are indicated in brackets.

Clan Apis by Jay Hosler
Story of an anthropomorphized bee from birth to death. Provides a gateway to understanding current crises in colony collapse and the critical role of honeybees in agriculture and global food supply chains. Supplemented with textual material on the science of bees. [Insect anatomy and social organization, populations, resources and the environment] 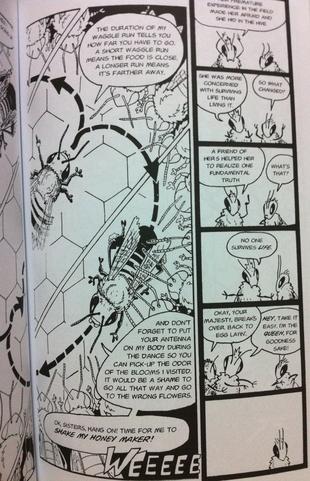 An anthology of comics by various artists in collaboration with scientists on ant biology and social structure. Individual stories are directly relevant and useable for to classroom discussions on ecological relationships, scientific field investigations and biodiversity. [Ecology, Biodiversity]

An account of how the ideas of genetics and their applications have developed from antiquity to the present. The book opens and closes with the interactions between social/ethical norms on science/ technology in the field of genetics. Overall a great introduction to genetics and valuable resource for an appreciation of historical and social perspectives of science. [Mendelian genetics, cell division, protein synthesis, gene regulation, genetic engineering]

Evolution by Jay Hosler, Zander Cannon & Kevin Cannon
A sci-fi plot involving alien characters that are trying to save themselves from annihilation by learning from life on Earth. A possible text supplement for reluctant learners. Comes with a glossary for technical terms used. [Darwinian & neo-darwinian evolution, natural history & biodiversity, mendelian genetics]

The Sandwalk Adventures: An Adventure in Evolution Told in Five Chapters by Jay Hosler
Story revolves around an extended fictitious exchange between Darwin & a hair mite living on his head. May be a useful supplementary text for addressing common misconceptions in natural selection head-on. [Darwinian evolution]

Neurocomic by Matteo Farinella & Hana Ross
A lively and humorous introduction to the subject matter, history and nature of neuroscience. Excellently executed “blown-up”drawings of neurons and synapses alongside clever use of metaphors convey complex subject matter with ease. Landmark findings and eminent scientists of neuroscience (from Cajal to Kandel) are weaved into the material. A possible text for extension of learning for neuroscience at schooling years. [nervous system, coordination]. 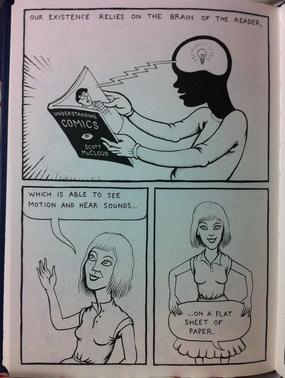 The Stuff of Life by Mark Schultz, Zander Cannon & Kevin Cannon
A sci-fi plot involving alien characters that are trying to save themselves from annihilation by learning from life on Earth. A possible supplementary text for reluctant learners or as an introductory text at higher levels. [molecular genetics]

Epileptic by David Beauchard
Memoir from the perspective of a young man whose brother suffers from epilepsy. Details of how the family rallied around the search for treatments in both mainstream and alternative channels of medicine. Account highlights the personal costs from and effects of epilepsy.
[neuroscience]

Marbles: Mania, Depression, Michelangelo, and Me: A Graphic Memoir by Ellen Forney
Written from the perspective of a young female adult’s odyssey of coping with bipolar disorder. Highlights the limitations from and effects of bipolar disorder as well as the limitations of and options made available by, medical treatments. The concept of mental illness as “neuro-diversity” is presented. [neuroscience]

Everything’s Okay: A Round Table Comic: My Journey Surviving Childhood Cancer by Alesia Shute
Perspective of a survivor of childhood cancer and its impact on family. Also presents the limitations from and biological effects of colon cancer as well as the options provided by medicine vis-à-vis non-medical, “non-scientific” therapies. [cells]

Primates: The Fearless Science of Jane Goodall, Dian Fossey, and Biruté Galdikas by Jim Ottaviani and Maris Wicks (with teacher’s guide here)
An account of how three women scientists pioneered the method of long-term field observations with gorillas, orang utans and chimpanzees. The interaction between scientific work and the social context in the fields, as well as the influences from and on family, academia and society are highlighted.

Optical allusions by Jay Hosler
Winkle the Wonder Brain journeys across time and space to retrieve a certain magic eye that will restore sight to his mistresses. While doing so, he comes across eyes of various shapes and sizes and learns about how vision works. [Eye structures, mechanisms of vision, darwinian and neo-darwinian evolution] 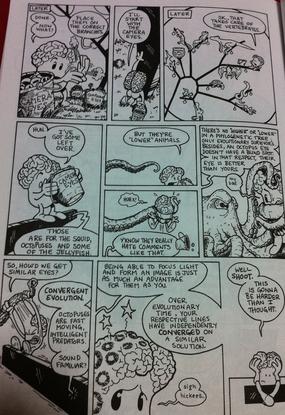 Wire Mothers: Harry Harlow And The Science Of Love by Jim Ottaviani and Dylan Meconis
An account of how Harry Harlow, set out to demonstrate that the basis of maternal-child attachment was comfort and security rather than feeding according to prevailing scientific thinking held by prominent scientists such as Skinner. [experimentation using animal models]

T-Minus: The Race to the Moon by Jim Ottaviani, Zander Cannon & Kevin Cannon
About the race between the US and Soviet Union to place a man on the moon. Highlights the series of preceding events starting with Sputnik and culminating in the launch of the US shuttle concerned. Shows the increments technological and breakthroughs achieved before the task of putting a man on the moon was finally achieved. Also shows the political and societal forces that exerted themselves on the scheduling and coordination of the program. [classical physics]

Laika by Nick Abzadis
About the first dog to be put into space. Shows the human costs and losses in the Soviet quest for technological superiority in the wake of Sputnik. Highlights the use of commonsensical and pragmatic thinking in working with technical constraints, and how this may impinge on individual and animal welfare. Also shows the relationship between national pride / brinksmanship and science, as evident on both sides of the Atlantic. [classical physics]

First in Space by James Vining
About the first chimp to survive and return alive from a suborbital flight during the time of the space race. Highlights the relationship between candidate animals and their handlers. Also sensitively suggests the trauma experienced by the chimps, as well as their deprivation in captivity after retirement.

Feynman by Jim Ottaviani & Leland Myrick (with teacher’s guide here)
About the life of Feynman and how his scientific skills intertwined with his personality in shaping his scientific output. Account also provides a glimpse into his involvement in the Manhattan Project and the political climate he was in. Also highlighted are the life-long intellectual struggle he had with quantum mechanics, showing that creative breakthroughs by scientists are often non-linear and intuitive. [quantum mechanics] 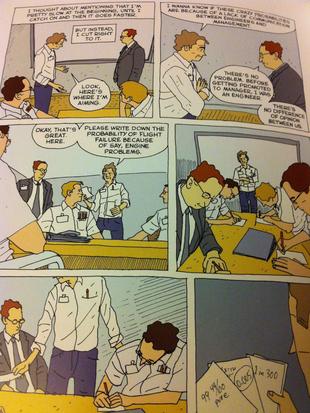 Fallout: J Robert Oppenheimer, Leo Szilard, and the Political Science of the Atomic Bomb Jim Ottaviani, Janine Johnston, Steve Lieber, Vince Locke, Bernie Mireault and Jeff Parker
An account of the genesis of the Manhattan Project, its development in the context of WWII and its immediate and long-term repercussions for individual scientists as well as American society and the world at large. Reveals the genesis of relationships between scientific research, national security bodies and the executive branch that are still relevant today.

Radioactive: Marie & Pierre Curie: A Tale of Love and Fallout by Lauren Redniss
Story of how Marie Curie transformed and transplanted herself into the heart of the French intellectual elite. Her intellectual journey culminating in the discovering of radium and polonium is traced, outlined. An account of the triumphs and struggles of a female scientist embedded in her own personal commitments intertwined with the social mores of the day. [elements and the atomic structure]

Suspended In Language : Niels Bohr’s Life, Discoveries, And The Century He Shaped by Jim Ottaviani et al.
Biography of Bohr that traces his intellectual journeys in science and the impact of his work in society. Account also describes the intellectual contemporaries that influenced him, and who were in turn influenced by him, contextualized in the science and politics of the 20th century. [atomic structure and quantum mechanics]

George’s Secret Key to the Universe (I)George’s Cosmic Treasure Hunt (II)George and the Big Bang (III)by Lucy Hawking, Stephen Hawking & Garry Parsons
Harry potter-esque trilogy for children set in England that weaves space science adventures into the lives of two friends and their parents. Part fiction, part science, part picture book, part comics, interspersed with colour plates and clear, accessible essays by eminent scientists in astrophysics on both sides of the Atlantic. The writing does not compromise on the conceptual and technical richness involved in astrophysics. A compelling link between current day environmental issues and the search for extra-terrestrial life, as well as the ethos and values of science, are highlighted. [(I) Black holes, matter, atoms, planets of the solar system; (II) space travel inventions, planets in our solar system; (III) black holes, worm holes, big bangs, colliders, strings, singularities , dark matter, relativity and all that jazz]

Levitation: Physics And Psychology In The Service Of Deception Jim Ottaviani & Janine Johnston
Account of the fierce competition to develop, guard and earn a living off staging magical illusions, especially of levitation in the early 20th century. The mechanical workings of the illusion is also revealed. [levers, pulleys, optical illusions]

The Cartoon Guide to Physics by Larry Gonick and Art Huffman
Distills the field of classical physics in two parts – Mechanics (including rotations) and Electricity & Magnetism (including some relativity, and quantum electrodynamics). Good coherent text that links major topics, good as refresher, and for understanding physics visually. Visual elements help complement traditional texts/lectures. Chapter on Maxwell’s groundbreaking equations that intuition is as much important as analytical thinking in scientific breakthroughs. [Mechanics, Electricity & Magnetism]

Science: A discovery in comics by Margaret De Heer
A terrific history of (western) science in chronological order, including origins from ancient greece, history of mathematics, the development of the “scientific method” from philosophy, the middle ages, the origins and history of chemistry, the history of women in science, science during the renaissance, the scientific and industrial revolutions, relationships between science and religion, the history of astronomy, the intellectual developments of physics and the biological advances from the 19th to 21st century. An invaluable text for teachers who want to be informed about the history and social nature of science.