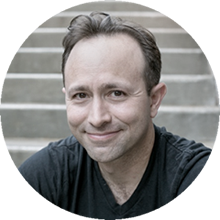 Nick Sousanis is an Eisner-winning comics author and an associate professor of Humanities & Liberal Studies at San Francisco State University, where he started and runs a Comics Studies program. He received his doctorate in education at Teachers College, Columbia University in 2014, where he wrote and drew his dissertation entirely in comic book form. Titled Unflattening, it argues for the importance of visual thinking in teaching and learning, and was published by Harvard University Press in 2015. Unflattening received the 2016 American Publishers Awards for Professional and Scholarly Excellence (PROSE Award) in Humanities, the Lynd Ward Prize for best Graphic Novel of 2015, and was nominated for an Eisner Award for Best Scholarly/Academic work. To date, Unflattening has been translated into French, Korean, Portuguese, Serbian, Polish, Italian, and Chinese (details here).

Before coming to New York City, he was immersed in Detroit’s thriving arts community, where he co-founded the arts and culture site thedetroiter.com and became the biographer of legendary Detroit artist Charles McGee. He developed and taught courses on comics as powerful communication tools at Teachers College and Parsons in NYC, and Comics as a Way of Thinking at the University of Calgary in Fall of 2015. Since fall 2016, he has been an assistant professor at San Francisco State University, where he will be launching a comics studies program.

Nick’s work has been featured with reviews and interviews in such places as The Paris Review, The New York Times, the LA Review of Books, PrintMag, Inside Higher Ed, The Chronicle of Higher Education, Publishers Weekly, Microsoft’s Daily Edventures, and Russia’s Theory & Practice for the new possibilities for scholarship that it represents. (See full list here.) He’s been invited to speak on comics, education, and alternative scholarship at such places as the National Gallery of Art (DC), Stanford University, Harvard’s MetaLab, Microsoft Research (which also hosted an exhibition of the work), and more, along with keynote addresses at the annual conferences of the Visitor Studies Association and the International Visual Literacy Association. His work has been on display in Moscow, the Netherlands, Microsoft Research, and more.

Recent comics include “Against the Flow” and “Upwards” in The Boston Globe, “The Fragile Framework” for Nature in conjunction with the 2015 Paris Climate Accord co-authored with Rich Monastersky, and “A Life in Comics” for Columbia University Magazine – for which he received an Eisner Award for Best Short Story in 2018.

He lives in San Francisco with his wife Leah Keller and their daughter.

A while back, I made a comics Bi(Bli)ography of myself, which includes my time studying mathematics, competing and teaching tennis, and more. It can be found here.