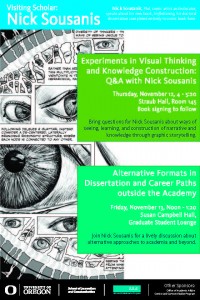 This week, I’m on the road again, heading to the University of Oregon in Eugene for talks on comics and education and alternative scholarship! For details on the events Thursday and Friday, please see UO’s events page here. If you know someone in the area – send them over!

Also, I’m thrilled that my comic in tribute to Maxine Greene is finally out in the TC Record. For those who don’t know the work of Maxine Greene – she’s a seminal professor of aesthetic education. I was fortunate to have her class my first term at Teachers College – the comic I made about her for the class, one of my first in the doctoral program is here. She then served on my committee and my defense was held at her home – where she met my then 3 week old daughter. Sadly, Maxine passed a month or so later. (I wrote some reflections on her here. As well as here on making this comic.)This actually began as a piece with Maxine herself (and the sketch below is from one of the sessions where I sat with her), but she passed before we could work on it properly. After hearing the beautiful memorial my colleague Daiyu Suzuki gave at her funeral, in which he referenced this tree outside her window, I sought to make the piece with him – two of her students carrying on her conversation. Daiyu and I had a wonderful time thinking about her and her work and what this tree meant to her and how we could think about that in our thinking. Our collaborative piece is part of a special issue on creativity in the Teachers College Record titled there, “Continuing a Conversation with Maxine Greene” (the comic itself is called “To See What She Saw”) and if you have access, can be found here Teachers College Record, Vol. 117 No. 10, 2015, p. 1-6. I’ve shared it in full below.

Some other news: Unflattening received a lovely review in AfterImage, the Journal of Media Arts and Cultural Criticism. Writer Stephanie Amon says “Unflattening is a delightfully profuse work on the nature of imagination itself.” See the full review here. The website Open Colleges also featured Unflattening in its feature on visual literacy and ways to grow it here. I’ve got a new comic in the works to be shared soon. Thanks for the continued support. – Nick 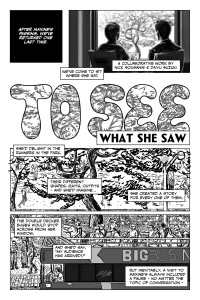 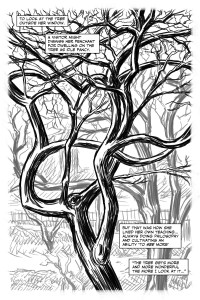 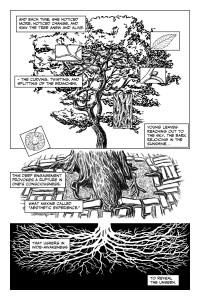 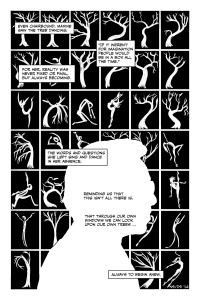 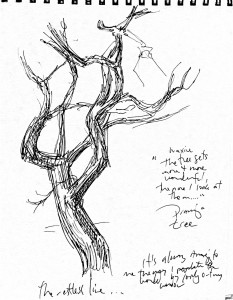 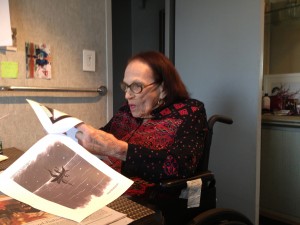