Sharing here my quadrennial presidential election comic for 2020 “ING…” I made the first of these political comics back in 2004 (see “Security” here and “Show of Hands” here), and that occasion prompted my full-on return to comics-making as an adult. As a result, I’ve ended up doing one each election season since. This one focuses on our current moment, on voting (as not an end point), and on democracy as something you do, not something you have – “democrac-ing”. I have some more words about it below along with process sketches. I’ve also provided a PDF for easier printing here. (You can see all the political comics I’ve made over the years, mostly on the presidential elections, here or from the “political” filter tab.) 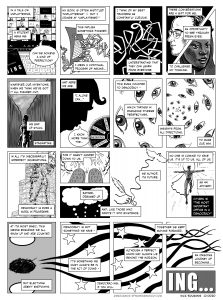 If you’re curious how this piece came together (I’m always interested in process as a maker and a teacher), I’ve shared the sketches and some of my text notes below in more or less the order of iteration (the lettered layouts with text might be slightly out of synch with the sketch pages). And I’ll provide a bit of commentary. Since 2016, I’ve tried to prod myself to become a more nimble cartoonist, to be able to make short pieces quickly that respond to current moments and allow me to work through my thoughts in comics. This hasn’t quite happened – and what time for comics making I’ve had has been devoted to the follow up to Unflattening (which is coming…). After making the piece “No Sides” in the spring, I found that format pretty productive for me, so I opted to try again. I was mulling some ideas around in my head for a while, and then for about a week, late each night after I’d worked on everything else, I’d devote about 15 minutes to making some sketches and jotting ideas down. After a few of those sessions, things started to congeal in such a way that I thought I’d found what I had to say. More iterations followed before I fleshed out the final details on the page, but for me, it was a relatively quick process.

Some notes about its contents. The opening story is true – I’m paraphrasing some version of the student’s question from what he typed in the Zoom chat and then repeated out loud to me. The audio recording was shared with me, so as this piece came together and I decided I likely would be referencing that conversation, I went and listened several times to make sure I could encapsulate what he asked accurately. The course is part of the Honors Living Learning Community at Rutgers Newark run by Professor Tim Eatman, who I collaborated with way back on this piece. The “unflattering”, “unflattened” thing happened at a different part of the conversation with the students, but I make this comment a lot. I hadn’t intended to talk about this silly/frustrating thing, but once I did – it made the ending and the title of the piece start to really take shape as noted in the sixth sketch page below. My dissertation advisor professor Ruth Vinz was a strong proponent of things “ing”, and it made me quite conscious of using it for Unflattening in the first place and going forward. My answer to his question did talk about my best teachers, and I specifically referenced mentors of mine, professor Maxine Greene (comic one and two I made on her) and Detroit artist Charles McGee. I had thought to work passages from them in directly, but the tiny amount of space I’d given myself to make it, made that more or less impossible. A lot more happened in the conversation with this class that got me thinking, and that happens all the time, no matter how many times I’ve discussed the work, I always start to get new thoughts. And I’m always grateful for it.

The idea about being stuck also came up in the conversation – I referenced the French revolution and “peril of perfection” – which I think I first thought about reading EO Wilson‘s Consilience a long ways back. I was never quite happy with this image, and in sharing it with a few friends and family, my initial attempt ended up getting scuttled, and what I ultimately went with is a callback to Unflattening. (My attempts to rework that image are at the end of the sketches. I have better ideas for it, but for the space allotted none of those seemed to work, so this had to suffice.) I did not enjoy drawing trump, even in silhouette. The “I alone can…” is also referenced in my 2016 election comic WE. I’ve thought since the Mueller investigation that while it would be nice for someone to swoop in and save the day, it just isn’t going to happen. So i had this Superman thing in mind from the start of the piece. I thought I didn’t have room and cut it from some of the middle iterations, and then it snuck back in near the end. Since listening to President Obama make his farewell speech in Chicago in the final month of his presidency (on the radio), that passage has stayed with me. I think it’s key – and so important that we see our role as far more than voting. I think of where I grew up in rural Michigan and how awful the people on our school board tended to be. These people had an agenda of their own and little do with the concerns of the school or the students – and the school suffered because of it. But they were the ones who ran for the post. I was teaching March as I made this, and thinking about marching and the forthcoming sequel to March, Run – and how important that is, whatever the level of office. I had in my notes to include words about marching, running, and more but for space it all had to go. This probably should’ve been a longer comic, but I somewhat arbitrarily picked the dimensions for it (what I’d used for No Sides) and I just felt I needed to make everything work within that, and thus let the process took me to the piece it became. After figuring out the final row imagery, I remained stuck on the final words. I knew what it had to feel like but the right word kept not coming. I happened to show the roughed out piece to my wife, and she suggested “becoming,” which was exactly what I needed, and all the remaining elements were in place. I know the word I want with “democrac-ing” but I’m not sure what the best way to write it is. My other choices: “democrac’ing”, “democracy-ing”, “democra-cing”. Open to better suggestions. A special thanks to RJ Andrews for feedback and insights along the way.

Anyhow, that’s a bit of a look inside. The more important thing is where we go from here. And the work that goes into a better tomorrow. Stay safe and be well – Nick 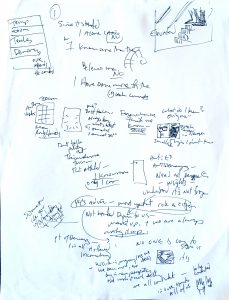 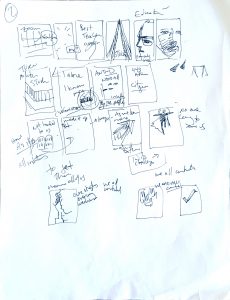 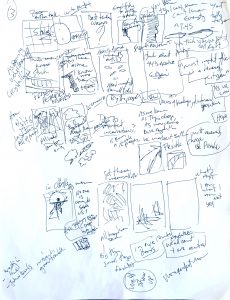 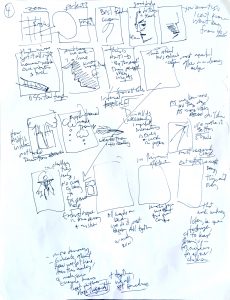 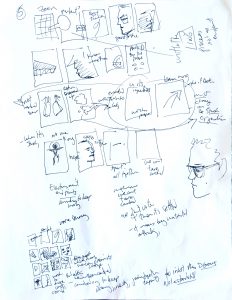 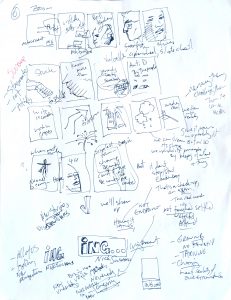 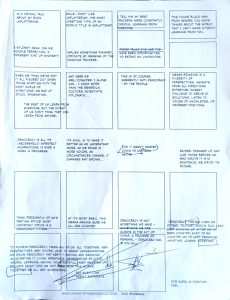 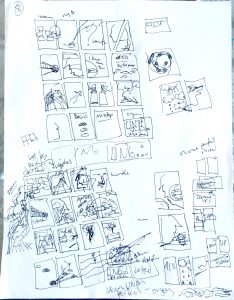