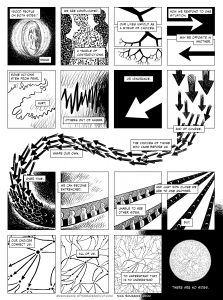 Down below, you can find a number of recent video interviews I’ve done and other news. But first, I’m sharing a slightly revised version of my comic “No Sides” that I’d originally posted back in early May, as well as a version of it created for mobile devices. While I won’t go into all the details, I’ll say that as of May, it was supposed to be published by a national news outlet, in June I reworked it to create the mobile version (which was an interesting challenge to say the least, given that the nature of my pieces is all about the use of the whole page, and for this, I had to think about each part as a separate element. Figuring out a solution to the middle section was particularly difficult – how to translate the arrows moving backwards across the page into something that made sense in fragments, ultimately it became a downward movement). It was all set to go to print two weeks and then right at the finish line, the plug was pulled. So it goes. But in making the mobile version, I’d cleaned up some of the drawing and integrated that back into the full page version, so I wanted to share both. Also, if you want this in PDF form, you can download it here. 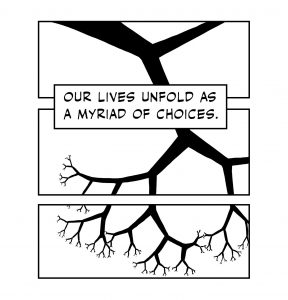 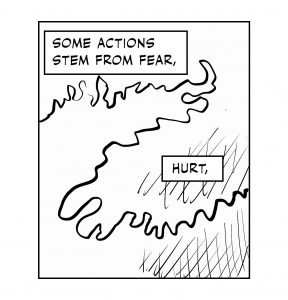 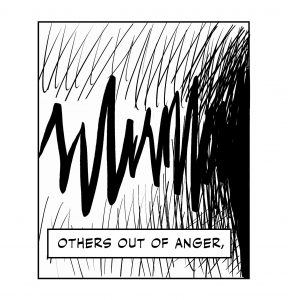 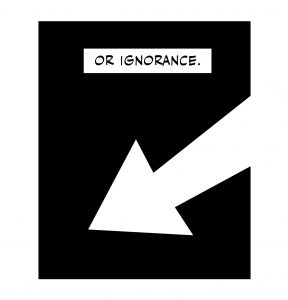 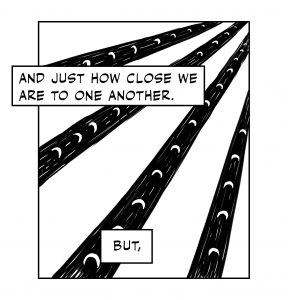 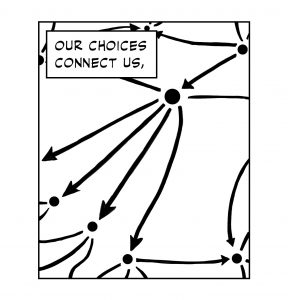 Between May and July, I ended up doing a number of interviews. Comics scholar Frederik Aldama had me on his Professor Latinx videocast series to talk about Unflattening’s origins, my process, teaching, and more. The conversation was a lot of fun, and it’s all part of an ongoing larger series of interviewing comics scholars. 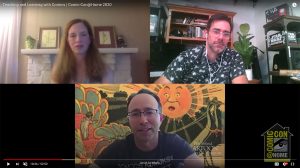 As part of San Diego Comic-Con@Home – I did an interview about my teaching of comics with Susan Kirtley and Peter Carlson, co-editors (with Antero Garcia) of the recently published anthology on teaching with comics With Great Power Comes Great Pedagogy (in which I have two chapters, one on my teaching and its evolution, and the other, co-authored with Fredrik Køhlert on our co-teaching, more here). This also included other comics creators and educators including Ebony Flowers (Hot Comb), David F. Walker (Naomi), and Brian Michael Bendis (Naomi). All of our conversations are available on YouTube here. Also the kind contributors at Women Write about Comics (who just won an Eisner for their comics journalism!) provided a summary of the talks here, as did the folks at Fanbase Press here.

I also did a long interview with the Netherlands’ Myriam Hadnes for her podcast Workshops Work for workshop facilitators. Different terrain than I frequently talk about the work in, but we had a truly expansive and generative conversation that can be found here.
Finally, legendary Media scholar Henry Jenkins asked me to participate in a roundtable discussion via zoom in conjunction with the release of his new book Comics and Stuff. We had a lively conversation around comics as form and object that now lives on YouTube here. 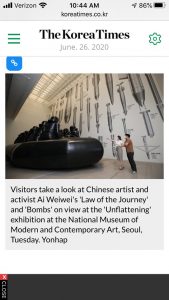 And in unexpected news, I learned mostly by accident that the National Museum of Modern and Contemporary Art, Korea (MMCA) is hosting an exhibition in commemoration of the 70th anniversary of the 1950-53 Korean War entitled “Unflattening”. From Kwon Mee-yoo’s article in Korea Times, “The title “Unflattening” came from Nick Sousanis’ graphic novel as the exhibit aims to provide fresh, different perspectives on the war people think they all know.” As the article also states, “The Korean title of the exhibition is “Unfamiliar War” as the younger generation feels distant from the realities of the war and ignorant about what happened.” Powerful and important exhibition, wish that I could see it (and hope to learn more about it someday…). More from the Korea Times here.

For the past 2 years working on this project, I have drawn all fluid compositions stretching across each spread w essentially no panels. With this spread they return with a vengeance and will continue going forward… (though hopefully never so many again)#nostos #unflattening 2 pic.twitter.com/Zf54MPMv5H

Work continues slowly on the followup to Unflattening, codename Nostos. You can see updates on my twitter feed, including the above look at a recent finished spread and the process that went into its creation below. Stay safe and be well… – N

I compiled for myself all the notes and materials that went into making the latest spread from #nostos #Unflattening 2. I’m intrigued to see how these things grow from small sparks & may be useful to others as well… pic.twitter.com/vOFWRXy3u1