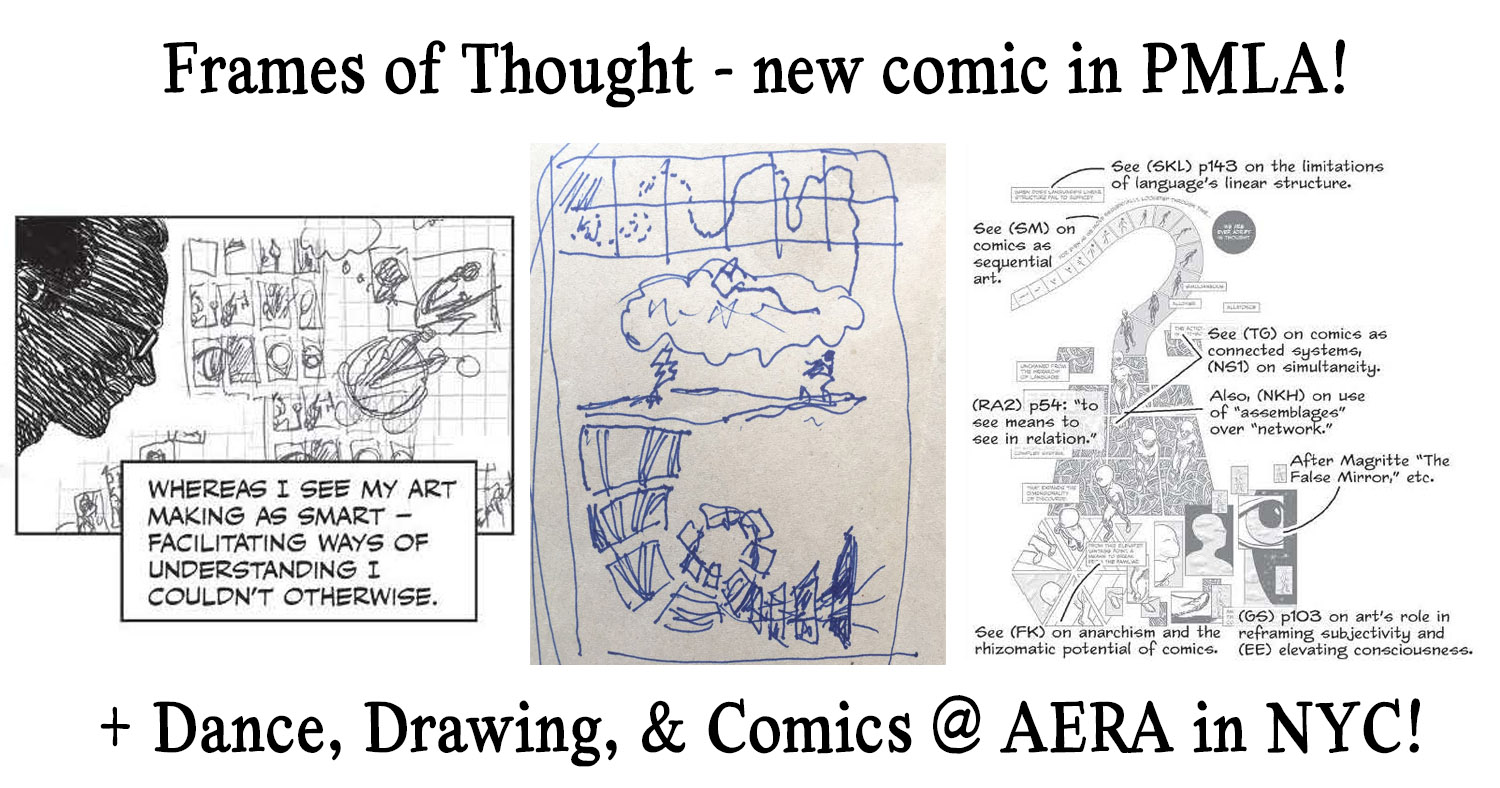 Publication news below with a new comic(!), but first some words about upcoming talks!

I’ll be in NYC this coming week for AERA – and excited to reteam with my colleague artist & drawing professor Andrea Kantrowitz and dance professor Kathryn Ricketts to do a session on drawing, dance, and comics. (My individual component of it is titled “Comics Author as Choreographer” and forecasts where I’m thinking about my next work…) We’ll be performing all those activities, discussing our approach to working in the different forms, and taking participants through exercises that move between each modality. Should be a blast! I’m also on a panel (though this is not listed in the official program) on the recently released Arts-Based Research in Education: Foundations for Practice, 2nd Edition, edited by Melissa Cahnmann-Taylor and Richard Siegesmund, which came out in December (which i shared more on here), to which I contributed a chapter on the development of my process, titled Thinking in Comics. It’s a terrific look at Arts-Based Research practicers from leaders in the field. Details and such here! I’ll be a respondent on a session as well, that looks terrific, and I’m exciting to learn about all the different research methods they’ll be sharing. You can see the program for AERA here. Specifics here: 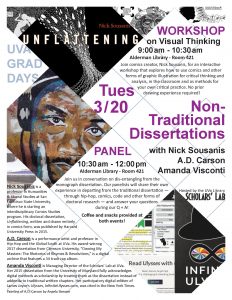 I’ve been doing a lot of thinking on alternative scholarship lately – from projects my students create (of which more will be available on my site here) to a student at UMBC choreographing a dance to Unflattening to recently serving on the doctoral committee for Rachel Sanders at the University of Georgia, where she successfully defended her dissertation as art-fashion exhibition! Last month I was pleased to be a guest at the University of Virginia, to speak at an event on alternative dissertations alongside Amanda Visconti, who did her dissertation “Infinite Ulysses” entirely digitally, and A.D. Carson, who challenged the supremacy of the written word with his hiphop album “Owning My Masters: The Rhetorics Of Rhymes & Revolutions” as dissertation last year. I greatly enjoyed the conversation and all the  thoughts it prompted about what counts as scholarship, who decides, and how we go about forging our own way. I have more to say on this, but for now, along those lines, I’m pleased to have contributed to the newest issue of PMLA Journal for the section organized and edited by Angelika Bammer, called “How We Write Now: The Humanities, the Academy, and the Twenty-First-Century World.” My contribution is a short comic titled “Frames of Thought” that talks about the relationship between image and text, poses that there are other ways of making meaning in scholarly fashion besides writing, and among other things, it offers my first attempt at trying to make a more visual endnote/bibliography. The issue includes contributions from Michael Bérubé, Anne Ruggles Gere, Terri Kapsalis, Carla Nappi, Gayatri Chakravorty Spivak, Lisa Eddy, Keving English, Beth Shaum & Sarah Andrew-Vaughan, Gina Hiatt, Kathleen Stewart; Tesla Cariani, Ashley Coleman Taylor, Christopher Lirette, and Marlo Starr and is available online on MLA’s site if you have institutional privileges (i’m contractually prohibited from sharing it on my site). I am sharing the opening page, which starts on a personal note, which is available in front of the paywall anyhow, and the endnote/bibliography page – which gives a hint at what all the comic does and more importantly showcases my strategy for trying to rework endnotes. I don’t think it’s quite succeeded, but it felt like an important first step and I welcome thoughts on where I might take it. I’ve also included some of the sketches that produced it – though some parts diverged from the finale. I’m excited about the different moves the piece made, so I wish I could share in full, but for now… A big thanks to Angelika Bammer for inviting me to contribute and then pushing me to get my piece done. To Julia Molinari for requesting a piece from me a long time ago, that ultimately fell through, but became this one. And to Frederik Køhlert for helping me work through a compositional design issue on the final page. A rare moment where someone has helped me with figuring out a sketch – which was fun. Below the images, I’ve put on excerpt of some questions I was asked in conjunction with the issue. – N 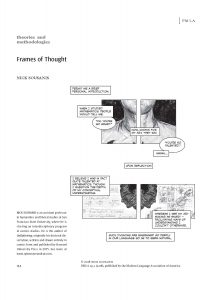 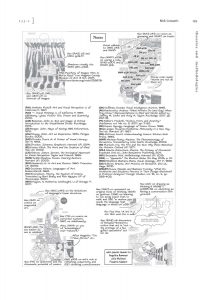 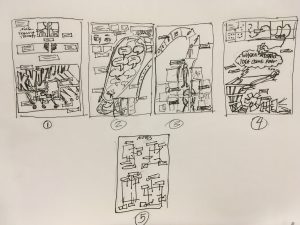 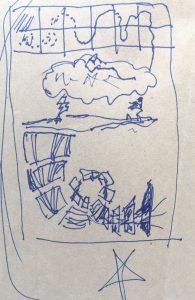 How We Write Now

The January 2018 issue of PMLA features a special Theories and Methodologies section on the question of how we write now. As Angelika Bammer, associate professor of interdisciplinary humanities in the Department of Comparative Literature at Emory University, writes in her introduction to the cluster, “writing is as fundamental to our work as reading—by some measures even more so,” and yet how we write has generated far less discussion than how we read. We asked Bammer and her fellow contributor Nick Sousanis, who is starting an interdisciplinary program in comic studies at San Francisco State University, to discuss the current state of writing, including their own.

How has the way you write changed over the course of your career? To what do you attribute those changes?

NS: As a kid, I wrote and drew my comics all the way through high school. When I went to university, I set that aside a bit, thinking I should be doing “intellectual things,” and comics, certainly in the official view but also in my mindset, weren’t that. I should note that my fascination with making comics didn’t mean I wasn’t interested in writing. Some years out of college, I ended up running an arts magazine and writing and editing many articles every week. But over that period, I found that as much as I enjoyed the work, I felt like something was missing. I wanted to be drawing. And it’s in turning back to comics that I found I could say things in a more powerful way than I could when I used only words. Over time, I also found I could make connections in my thinking that weren’t possible unless I was drawing and writing at the same time. It’s with this realization that I came back for my doctorate, with the idea of making comics in an academic setting.

What recent cultural changes have had the most significant impact on how we write in 2018?

NS: Certainly one change is the increasing acceptance of forms that go beyond strictly text as part of how we make and present meaning. Was this simply long overdue? A result of our visually and digitally saturated culture? When I approached doing my own work in comics I didn’t see it as a big deal at all. It was more, Well why not? But since then, I’ve seen the struggles people have faced, the barriers in their way, and a kind of fear that shuts things down before they get started. Obviously this is easing, but it’s not happening all at once or everywhere. It takes time. For those who are worried that these new forms will pose a threat to writing, it’s better to see this not as reducing but as adding to or, better yet, as multiplying the ways we can convey meaning. Is it a more complicated terrain to navigate? Sure. But I think we’re up for the challenge—and I know our students are.