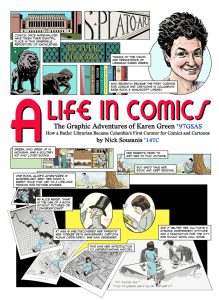 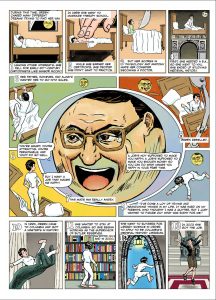 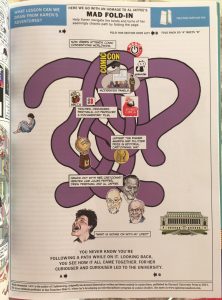 This April, I was geeked to learn that the short comic I made in 2017 on Columbia’s comics librarian extraordinaire Karen Green was nominated for an Eisner Award in the Best Short Story category! It was a huge effort, despite being a short piece, as it wound through some highlights of the history of comics as a way of telling her life story and required me to do, among other things, do an homage to Al Jaffee’s legendary Mad Fold-ins using her actual words to come up with a closing message. Very pleased to have it included in such company – and pleased to be nominated for an Eisner a second time (Unflattening was nominated in 2016). You can see the comic in Columbia Magazine here and more behind the scenes details on my post from last year here. The complete list of Eisner Award Nominees are here. If you’re curious about how the Eisner judges come to their decisions, check out this great interview with this year’s judges. To learn more about individual nominees, The Comics Reporter provides a great list of links to all the Nominees here and Fanbase Press wrote short descriptions of each nominee on their site. If you’re trying to get a sense of what’s going on in comics, the Eisner nominees are a great place to start. In fact, Karen Green discusses building her collection at Columbia initially by buying everything that was nominated for an Eisner each year. A great range of what’s out there! 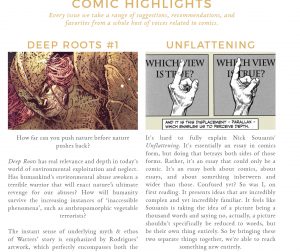 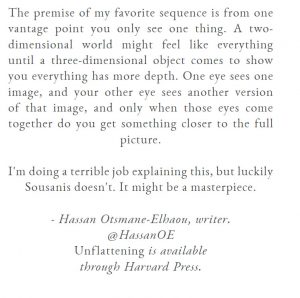 Unflattening got a lovely mini-review from Hassan Otsmane-Elhaou in his Eisner-nominated Panel-x-Panel comics magazine. Hassan has quickly become one of the most insightful voices discussing comics, initially with his YouTube comics analysis channel Strip Panel Naked (which I always recommend to students), and he is expanding that with the publication of PxP – which has been publishing smart, in depth looks at comics of all sorts in its first year. Have a look at PxP here – I highly recommend it! (Oh, and the Portuguese edition of UF received a nice writeup on this site.)
Some travel news – I’ll be at the University of Northern Colorado in Greeley June 14 and 15 to give a talk and a couple of workshops. If you happen to be in the area or know folks who might be interested, details are here. If you didn’t see it, I have a new short comic out that I made for PMLA Journal – details and sketches are here. 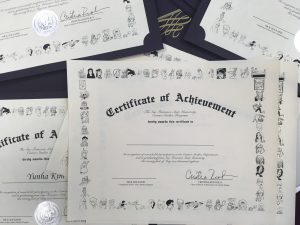 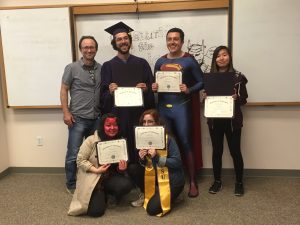 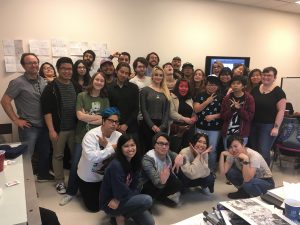 Finally, a few weeks back, I was pleased to graduate the first five students from our Comics Studies Minor at San Francisco State!! We only became official as of December, and things have moved pretty fast in my two short years here at SFSU. I’ve been fortunate to have students with a wide range of interests and approaches to comics bring their boundless enthusiasm and strong efforts to their work, and I continually learn a lot from them. This is just our start, and we’re excited to see how the program continues to grow from here! I have promised an update on my courses and student examples for a while now, and hopefully I can get to that over the summer. Also, my Advanced Making Comics students produced an anthology of their work for our final, and I’ll be able to share that publicly when it’s online and in print. More to come! – N
June 7, 2018
Share this post
Share on FacebookShare on Facebook TweetShare on Twitter Pin itShare on Pinterest Share on LinkedInShare on LinkedIn