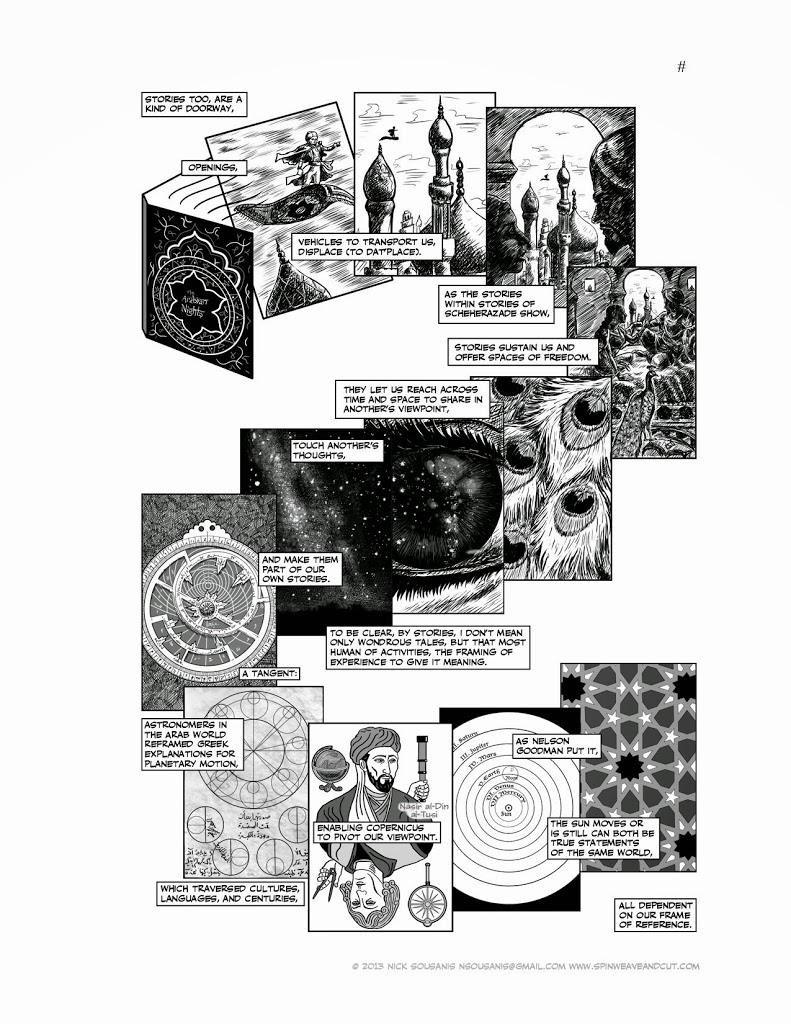 Finished Chapter Five a little while back and now racing through Chapter Six, and wanted to share the page on stories I teased an excerpt of earlier. This page takes up the importance of stories, with Scheherazade as point of inspiration I build around. I had in mind book pages, frames that expanded from one another, snaking back and forth across the page, with the idea that like the stories within stories that make up the 1,001 Arabian Nights, each panel contains an element of the prior one, either zoom-like (ala the classic Eames’ film/book “Powers of 10”) or via more metaphorical links. But it was important idea-wise for me to talk about stories as not only fanciful tales, but the imagination of scientists – and so in seeking an appropriate example, I came across the work of Columbia University Professor of Arabic and Islamic science George Saliba, who has shown that astronomers working in the Arab Golden Age whose relatively unknown contributions made the revolutionary work of Copernicus possible (and Copernicus was taken up in an earlier chapter). Specifically, I ended up reading about Nasir al-Din al-Tusi and his explanation for a particular kind of observed planetary motion now called the Tusi Couple. 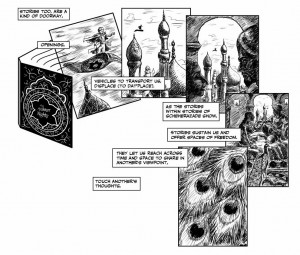 It ended up being an intense search trying to make sense of the history and mathematics well enough to use it for essentially all of three panels that tied into the series of transitions. Not great for finishing this all on my increasingly tighter deadline, but rather a thrill as ideas swirled together and the collision of my aesthetic decisions and research took me unexpected places. Had I been doing this only in text – I might’ve mentioned that by stories I meant science too – and moved on. But because of the visual schema I set forth, I had to find ways to hold it together visually, which made me search further. Those two forces conspired to make a stronger page than I had any inkling of doing otherwise.
In talks of late, I’ve been saying that my comics are smarter than I am. It’s not meant to be cheeky. In engaging spatially with image and text, ideas and aesthetics, I find I’ve got a powerful cohort of collaborators, that in some sense, as I said at MLA recently, “have their way with me.”

And so that makes me think of the President’s recent careless dissing of the humanities (art history taking the biggest hit) – which I don’t believe he meant nor would he agree with the statement if pushed. (Columbia U art history doc student Tina Rivers had a great response here.) But it points to a larger problem: the tendency to divide into factions, to set up us versus them in this case, arts versus sciences (the divide CP Snow identified way back as “The Two Cultures”). And in some sense this is at the heart of what I’m getting at with “unflattening” in the dissertation and maybe throughout all of my work. My political comics sprang from the idea of needing to talk to one another across artificial boundariesand get beyond labels. Consider the simple fact that in seeing through two eyes we gain perspective and access to depth. Lacking that, our world is somewhat more flat. To engage with our world in a different way, we need multiple viewpoints, multiple modes and ways of seeing. And we need these vantage points to both be a decent distance apart, so that they offer us distinct views, but also that they continue to communicate. Separate yet strongly connected. 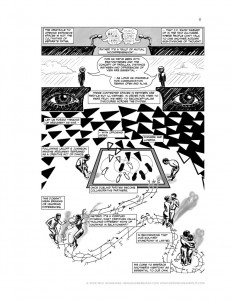 To be better thinkers, to be more whole in our thinking, we need engage the various viewpoints, the different ways of seeing, that we have at our disposal. In a grand sense, this means not building barriers between the arts and the sciences. My page as described above, speaks to keeping communication open between the arts and sciences and respecting the different views they each make possible. The stories we fashion – of all types – are essential. We need to be many-eyed to tackle challenges in a more dimensional way – and need to cultivate the multitudes of approaches of which we all possess.
Onward! – Nick
February 6, 2014
Share this post
Share on FacebookShare on Facebook TweetShare on Twitter Pin itShare on Pinterest Share on LinkedInShare on LinkedIn