Coverage in the Chronicle and new page on Commuting

This past week, the Chronicle of Higher Education kindly featured my dissertation work alongside Dani Spinosa’s publicly-blogged dissertation in-progress. I’m overwhelmed by and grateful for all the support and enthusiasm this article has generated. Writer Sydni Dunn provided an indepth look into some of the backstory of how this came to be and its significance in pushing on the forms for scholarship. She also went so far as to get the perspective of my advisors Ruth Vinz and Robbie McClintock, whose openness to this work, I’m realizing I take somewhat for granted as I hear stories of others trying to tread alternative terrain of their own stopped short. I also appreciated the inclusion of the question of “what’s next?” As I find myself in this moment feeling quite fortunate to be doing work I want to do, to share it, and to teach courses I am thrilled to be teaching (comics for educators at Teachers College and a comics readings course at Parsons), I’m also particularly aware that finding an institutional home going forward is a less than straightforward proposition. You can find the article on the Chronicle’s site here.

Over the last few years, I’ve been extremely fortunate to have had an ongoing public conversation as I developed this work through conferences and talks. This has also included previous interviews, including in venues based in Russia, Alaska, Microsoft (which also put on an exhibition of the work), the UK, and in the Chronicle before I’d drawn anything. This most recent article, sprang from a  feature mentioning the work in the Chronicle on this year’s MLA meeting. Also, in the interest of completeness, Liz Losh, author of Understanding Rhetoric in comics form, included the work in her recent post on comics and scholarship.

I was particularly delighted to see my dear, departed dog prominently in the Chronicle of all places! This page began as an aside and has in many ways come to summarize the core of the work – that we make sense of our world by many different and diverse modes. And as I said in the interview, my approach from the start to do my doctoral work in comics form was “why not?” – of course one can do smart thinking in comics. Why does any form/mode have a claim on what thinking looks like and what counts? Because that’s how it’s been and stuck in that mindset, we only recognize thinking that looks like thinking that has come before. Which of course influences what learning looks like and how it is constructed.

Along these lines, lately I’ve been talking about how when I studied mathematics (my undergraduate work), people would say to me, ‘oh, you’re so smart.’ When they know about my work in comics, they’ll say, ‘you’re so talented.’ As I reflect on it now, I think I was talented at mathematics, whereas I see the art I do as smart – and as I said in the article, by collaborating with the visual, my comics are smarter than the work I do in text alone. These arbitrary labels, these boxes we divide ourselves into, that put a limit on what we can be. 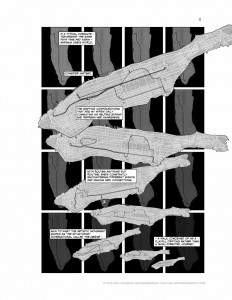 In relation to all this, I want to share one new page here that speaks to the unique quality of comics to do two things at once – hold two ideas in a single space – which is also very much where my philosophical concept of unflattening evolved from. In this page from the chapter “Ruts” (regarding the patterns of behavior, the ways of seeing in which we find ourselves entrenched), I wanted to demonstrate commuting as a kind of rut, and contrast it with my wife’s commute – a non-repeating dance around the city taking her to various locations in unique configurations each day. I connected this to the Situationist’s idea of the dérive – literally to drift. Most likely I will talk about this page as part of one of my sessions at the upcoming AERA conference, and my thoughts on it grow out of a presentation there last year on how the work isn’t about illustrating ideas rather it’s having the visual embody the ideas. Here, I thought about how my wife’s paths mapped onto the NYC map could drift across the page while statically in the background, the repetitive commute becomes pattern. It’s a simple enough of an idea – but one I think is richer in comics form in the ways that the two visually contrast and speak to one another. 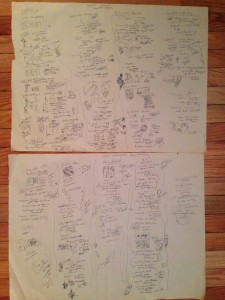 Finally, on a more personal note, I’m buying yogurt now with use-by dates beyond the expected arrival of my wife’s and my first child, so this site will likely be a bit silent as we welcome that new experience and I try to bring the dissertation to a close. (I’m sharing my original outline here, I’ve got the final two columns to draw!) I do have one more post planned before then – a request for some crowdsourcing legwork (or footwork!) for something for the final chapter. Stay tuned and thanks for the support. Onward. – Nick
March 7, 2014
Share this post
Share on FacebookShare on Facebook TweetShare on Twitter Pin itShare on Pinterest Share on LinkedInShare on LinkedIn