Comics on the Rise

Some updates…
Unflattening received a lovely review in the Journal of Graphic Novels and Comics, by Dr. Amanda O. Latz, Ashleigh N. Bingham, and Jessika O. Griffin. I really appreciated that they drew attention to the educational themes of the work. A little excerpt from their opening and closing:

“Unflattening not only deroutinises the traditional dissertation form, it conveys the content through an aesthetically pleasing pastiche of images and text, which necessarily disorients and challenges the reader. The work is a treasure trove of ideas related to education, epistemology, ontology, interdisciplinarity and metacognition. An in-depth engagement with the book will reveal the contours of Sousanis’ influencers and inspirers (e.g. Ivan Illich, Maxine Greene, Scott McCloud) as well as his brilliance as a scholar, artist, thinker and emergent public intellectual. Do not just read this book. Engage with it. Deeply. …

In sum, this book addresses many things. Sousanis necessarily asks us to act, at least in the sense that we must actively reconsider that which we consider routine and normal, as being unfamiliar and strange, even as he confronts us with things we already know while presenting us with our own imposed flatness. To us, however, its educational themes are most important. Despite this, a wide readership, including but not limited to teachers, philosophers, designers, social scientists and comics scholars will benefit from this work. Sousanis inspires, invigorates and entices just as much as he challenges, befuddles and agitates. For us as readers, the final pages were most tenuous. We wanted climax, closure, and an answer –  a plain directive. But Sousanis left us chasing questions instead of giving us an answer. There was a strong lesson in the visceral discomfort we experienced. That was, perhaps, the point.”

I think they hit what I was after just right in these final words, and I’d like to think that Maxine Greene would’ve appreciated this – a book that ends with questions rather than providing answers… See the whole review in PDF here: Unflattening JGNC Review (PDF).

Also, AfterImage, the Journal of Media Arts and Cultural Criticism reviewed Unflattening a while back. I hadn’t realized then only a snippet was available online. I’ve since read Stephanie Amon’s extremely thoughtful full review and wanted to share here. An excerpt:

“It is a measure of Nick Sousanis’s vigor as an artist and thinker that any traditionally academic review of his book must proceed from the strain of the translator’s predicament, and no less from the pleasures of laboring under the spell of his work. … Sousanis’s decision to dissertate through comics aligns the agency of Unflattening’s reader-looker with his own fecund moral intelligence, making the book a visual paean to the pedagogy of freedom. Drawing on a cross-cultural range of intellectual history, naturalism, and educational theory, Unflattening is an absorbing peregrination that deserves to be—indeed, must be—encountered in its own form. Integrating visual citation, extensive and personable endnotes, and a bibliography reaching far beyond disciplinary bounds, Sousanis has achieved an exemplary work of creative scholarship of such benevolence and sheer ingenuity that doubts about the kaleidoscopic potential of theoretical comics may be henceforth cast aside (and productively examined for their bigotry).”
See the entire review as a PDF here: Unflattening AfterImage Review (PDF) (Full press list here.)
Back in early January, I participated in a large panel session at MLA on teaching comics. Really spirited and engaging discussion between participants and attendees. Professor Liz Losh, who was on the panel, wrote a brief summary of the session here as did co-organizer Derek McGrath here. Bart Beaty also wrote about the session as part of a longer post about MLA and the growing rise of Comics Scholarship in the academy. 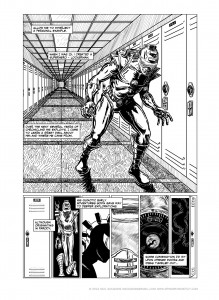 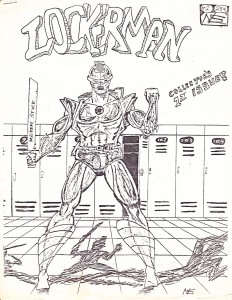 Concerning the rise of comics in the academy, I was recently interviewed by Canada’s National Post for a feature on just that, alongside Ben Woo and cartoonist Scott Chantler. The article suggests that the battle to get comics accepted in higher education has been won, but I think I’d characterize it more as ongoing – with certainly some significant victories. There is a lot more that I said, and I know Ben did as well, on such things as the growth of women reading and making comics, that I wish had made it into the published article. But pleased to see the spotlight it shone on comics and hope this momentum continues to grow. Among other things fun to see my dog and the superhero I created when I was 13 appear in this venue! See the article here.
After MLA, I went to NYC for a day, to speak at a professional development day hosted by the NYC Department of Education at the NY Historical Society. An enthusiastic group of around 200 educators were in attendance – I got to be on a panel with some editors at Marvel, gave some workshops on making and using comics in the classroom, and gave the pre-lunch keynote (Scott McCloud gave the closing keynote!). A really invigorating day – excited about the energy of the other presenters and the teachers. I see such a change in how comics are being seen and ways they are making their way into classrooms. On all these different fronts, excited to see the energy around comics and eager to see where it goes.
While my fall Comics as a Way of Thinking class has come to an end, you can catch up on what we did and examples of student work from the course here. And even though that is over, I’m pleased to still be teaching comics – this time out with fellow postdoctoral fellow extraordinaire Frederik Köhlert. It’s a huge class and we’re figuring out ways to get them to draw despite that and enjoying the new sorts of discussions that emerge from teaching collaboratively.
Over on Professor Hacker at the Chronicle, Anastasia Salter shares some words on the Digital Humanities Quarterly special issue on comics as scholarship that she co-edited with Roger Whitson. You can see the issue here, and my contribution – some reflections and sketches on the process of drawing my dissertation here.

The comic on climate change I made for Nature with Rich Monastersky has ended up at the top of their best/most popular features of 2015! If you haven’t seen it, check it out here. Unflattening was listed among the top five bestsellers of January at Drawn & Quarterly in Montreal! Discontinuity’s Collin Colsher put Unflattening on the top of his list of best comics of 2015 – calling it “A religious experience, a spiritual awakening.” See his list and full review here.
U of Iowa professor Sarah E. Bond wrote a post on comics from Sarcophagi to McCloud to Unflattening! Nice synthesis of ideas here. The UK Graphic Justice site gave my class and Unflattening a shoutout in its January newsletter. Also, Dino Sossi of New Learning Times out of Teachers College interviewed me in print here, he also did a short video interview with me earlier here. This was all connected to my talk at Teachers College back in September of 2015.
Finally – I’ll be speaking virtually Saturday, February 6, at the Centre for Contemporary Arts in Glasgow, alongside Chris Dooks of the UK for a talk titled “Troubling the Academic Thesis.” I’m not exactly sure what time this is happening – but it will be recorded and made available by organizers from the University of West Scotland. – N
February 2, 2016
Share this post
Share on FacebookShare on Facebook TweetShare on Twitter Pin itShare on Pinterest Share on LinkedInShare on LinkedIn