Wow – so a few weeks back I was contacted by Katya Korableva a journalist working for the Russian arts-education magazine Theory & Practice to talk about my dissertation in comics. The interview with images of the work now appears on their site – entirely in Russian! Please see here for the interview with images. Katya asked some really thought provoking questions that made me have to think deeply about what I’m up to, and I’m grateful for the opportunity to share with T&P.

For those of you who can’t read Russian, I’ve posted to text of the interview below. At the close of that interview, I posed a question about comics education projects going on in Russia. For any Russian readers coming here – I’d love to hear what’s going on.
With Great thanks to Theory&Practice and Katya for the support and thoughtful interaction. A treat for me all around. – Nick 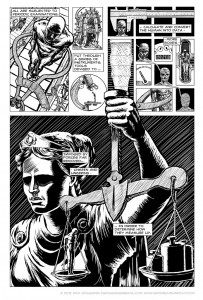 Probably the first question is the hardest, but I dare to ask: how is your dissertation going? What are you drawing and writing right now? Can you tell us already, when it will be published?
Good question! I’m pleased with how it’s coming along. It’s a slow process, but I feel each page is worth the time it takes. I’m in the middle of the second chapter, which is a discussion of interdisciplinarity through the metaphor of how we see, and I just finished a sequence spanning from the Copernican Revolution to the Enlightenment. These particular pages weren’t in my original outline, but they emerged organically in the process of making. I expect to have the entire work completed and defend in spring of 2013.
Your dissertation illustrates beautifully a melting of science and art. Do you hope that it becomes a new standard for theses?
Thank you. I do hope that it helps open doors within the academic community for other visual-verbal scholarly works, as well as other forms already in existence or still-to-be-imagined. But I don’t see this as becoming the new standard. Rather, I hope it contributes to raising the question of what “standard” means, and providing an example that others will take up in their own way, by their own means of working.
Did you have to fight for the approval process?
Actually, no. I came to Columbia with the idea that I would do something like this. Back in Detroit, I had made a comic book about the history, meaning, and philosophy of games in conjunction with an art exhibition we organized there. I shared this work with professors here when I was applying as a demonstration of the potential for how comics could present complex ideas in an educational manner. It was received positively, and once I got here, I began making comics for my assignments. In fact, my primary advisor, Dr. Ruth Vinz invited me to make a comic as the final chapter of her recent book On Narrative Inquiry. I think as with graduate students, professors too, are hungry to see something different in the academic realm and they’ve demonstrated strong support in believing that this should happen.
Could you also imagine writing your dissertation in a more convenient way?
Ha! Sure, I like to write, I like to play with words, and I spent a lot of years writing thousands of words per week as an arts writer back in Detroit. Writing this would definitely take less time – but I find that I’m able to achieve something more whole in my thinking when I draw and write together, and I’m thrilled to be engaged in that process. I think it leads me to discoveries that I wouldn’t come upon using text alone – which is an integral part of my argument. There have been plenty of things written about the importance of visual thinking, but I believe we need to “walk that talk” and actively engage in the making. To be true to what I’m proposing, I think it’s necessary to say it in image.
Sorry, I know that everybody asks it, but when you get the idea, do images or words come first?
My playful but absolutely true answer to this is always: “Yes.” I can’t speak for other comics authors, but in my case, I begin with some notion of what I want to express and then I start to sketch out ideas in image form and text. As I play with these very loose ideas across the space of the paper, I start to make connections, draw associations between images, between text and image, and that leads to new elements being added to the mix. As this continues, the idea starts to take shape more fully. Even when I have a rough script and fairly detailed layout, I find that the text keeps pushing me to reconsider images and what I’m drawing asks me to alter the text. It’s a constant back and forth, right up until it reaches some balance that satisfies my initial ethereal idea – often in a way I hadn’t expected.
A lot of people have difficulties producing a huge content. What helps you to stay inspired?
For me, this is about a desire to see the ideas realized for myself and to share them with others. I enjoy asking questions and exploring possibilities, and I find it’s not until I’ve created the piece that I really understand things. Even when I’ve laid out the piece (which I have done with the dissertation), there are still surprises on every page along the way. It’s not really a matter of filling in the details after the outline is there, but a process of ongoing discovery that the work takes me on – and I am excited to make that journey.