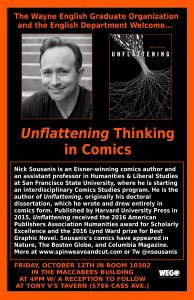 This Friday October 12 at 4pm, I’ll be a guest of the WSU English Department to discuss Unflattening and thinking in comics at Wayne State University‘s Maccabees Building room 10302, reception at Tony V’s Tavern at 5756 Cass Ave to follow [Note this has changed from my original post]. I did my masters there (well, two simultaneously) and taught public speaking in the Interdisciplinary Studies program for several years – not to mention my time running the arts & culture magazine www.thedetroiter.com that I co-founded with my brother and ran and wrote art reviews for for six years! (It was here too, that an invitation to the art shows Reviving & Restoring the Tree of Liberty at Zeitgeist Gallery (those comics I created are here), prompted my return to comics making before heading to doctoral school.) So, it’ll be a nice homecoming! I’m also in town for the Association for Interdisciplinary Studies‘ annual conference being held at Wayne State (well, the Crowne Plaza Hotel). There I’ll be doing a continuation of a performance/workshop with colleagues Andrea Kantrowitz and Kathryn Ricketts bringing together Drawing, Dance, and Comics. We had a blast with the first attempt at it in NYC earlier this year (see here), and excited to expand it further. I also have the good fortune to hear Alexia Petasis, who is the student who choreographed a dance in response to Unflattening in her interdisciplinary course at the University of Maryland Baltimore County. I shared some thoughts on this and the video here. For more about the conference – see here. 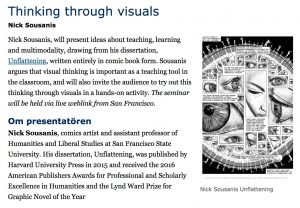 While I’m in Detroit, I’ll also be virtually speaking to about 1000 educators (!) at the National Centre for Swedish as a Second Language‘s annual symposium on Thinking through Visuals. We are planning to also do grids & gestures in a combination of via skype and twitter – which should be interesting. We’ll post them live at #gridsgestures and #sympos18 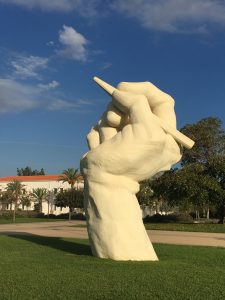 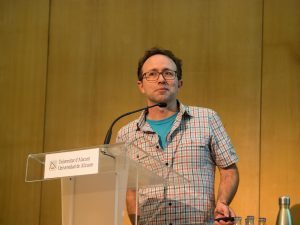 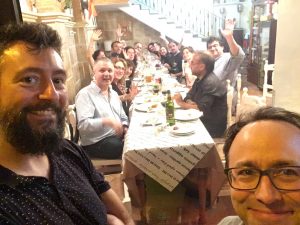 The following week, I’ll be back at UC Santa Cruz, where their Cowell Residential College is using Unflattening as their common read. I had the pleasure of visiting with them last year as well and pleased to have Unflattening continued to be taken up by students there. And at the end of the month, I’ll be at Duke University, to do a talk and workshop as part of the Franklin Humanities Center’s Neurodiversities Symposium. And two weeks ago, I was in Alicante, Spain for Unicómic XX. It was a whirlwind of a trip for my sixty hours there – but a lovely event all around. Great energy and collegiality and a lot of smart talk on comics. I’m grateful to have had the opportunity to share and learn from folks there. A writeup of the conference (in Spanish) is available on Tebeosfera here. Besides talking comics with everyone, had a tiny side trip to the MARQ Anthropology museum in Alicante, where they had on display a special exhibition of “macro-schematic” prehistoric artworks – which felt quite in line with the comics work on display at the conference. Food for thought for future work all around! – N 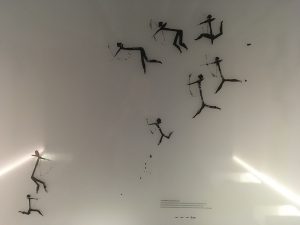 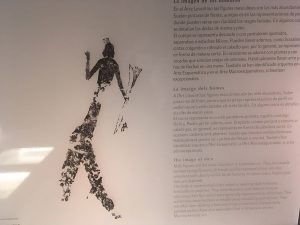