It’s getting to that time in the semester – what began as a wave of newness, then turned to a mass of projects in multiple directions, now begins a rapid race to the finish line. When I drew up my syllabi this summer, I made a little drawing marked December 7th for the arrival of “baby boy Sousanis” (which close readers may have caught) – and so any day now, a new little person will become a part of my family. He’s already here, making his presence known, listening, taking things in, and I can’t wait to meet him. Among other things, that means while I’m beyond grateful to have been able to travel freely to all the places I’ve gone, to have met and learned from so many people far and wide, and all that this work has enabled – I’m happy now to stay put for the longest stretch in several years.

This has been a full fall of events, perhaps wrapping up the last several years of travels related to Unflattening. I kicked it off by offering Grids & Gestures again as a virtual challenge alongside sharing my teaching materials. In October, I went to Alicante, Spain for the lovely academic comics conference Unicómic XX for 3 days, later I was back in my hometown of Detroit – and did talks there and virtually in Sweden at the same time, made my way down to UC Santa Cruz where Unflattening is again their Cowell Residential college common read, and finally at the end of October headed to Duke to take part in a fascinating symposium around “Neurodiversities” through the Franklin Humanities Institute – and the things I learned there from DJ Savarese – a poet who is the first nonspeaking autistic to graduate from college, and his dad professor Ralph Savarese and the others assembled, has given me much to think on in my work ahead. My current book project follows up on Unflattening and delves deeper into connections between movement and thinking. I was finishing Unflattening as a dissertation right as my daughter was about to enter the world, and while I wish I could say I was equally far along with the next before her brother comes along, as UF was anticipating what the world might be like for her, this follow up is deeply engaged with how we come to encounter and make our way in the world – and I’m grateful I’ll be able to witness this firsthand all over again. This project has been slower than I’d like in taking shape, but ideas are taking on lives of their own and I’m excited to go on the journey. I’ll update here periodically with some glimpses into it and perhaps slightly more frequently – process sketches on my twitter feed. 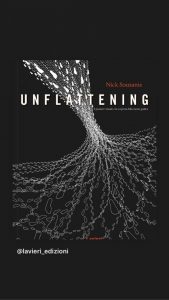 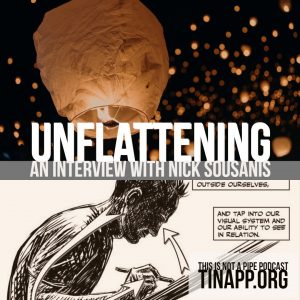 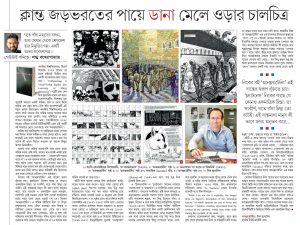 Some general news… The Italian edition of Unflattening is out from Lavieri Edizioni! Pleased to have this join French, Portuguese, Korean, Polish, and Serbian editions! Some reviews have already come in (in Italian) at Lo Spazio Bianco and Stay Nerd. I was interviewed by Chris Richardson for This Is Not a Pipe Podcast. We went off on a sprawling conversation on creativity, process, and more – plus I offered an eclectic set of book recommendations, which may give a tiny hint at the new work. That’s all available here. The other image above is a writeup in a Bengali newspaper by cartoonist Sankha Benerjee. I haven’t read it, but I love the visual connections he drew in the article. (Anyone who can read it – i’d be curious to know what it says!) 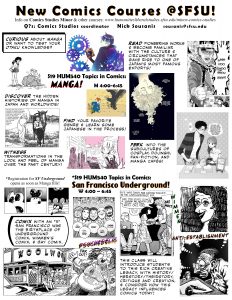 I’m on sabbatical spring semester, so while I won’t be in the classroom, our comics studies program at SFState will continue to grow in my short time away with new courses on the SF Underground and Manga. You can see things I’ve done with my classes always here and I expect I’ll post things from my current classes, as I catch up a bit on that – easier to do when I’m not doing new ones! Stay tuned! And thanks for the support – N