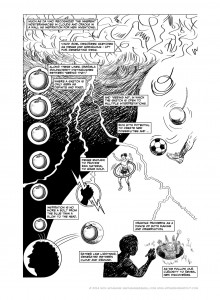 Following up on my previous post, I’m sharing a second deleted scene that appeared in the dissertation but was cut from the published edition. Like that previous one, which dealt with my process of Spin/Weave/Cut, this too comes from Chapter 4: “Our Bodies in Motion,” which delves into thinking about drawing through our perception. On this page, I took up the ways in which sketching can be a generative tool for the sketcher – allowing us to see new ideas in our own drawings. (This page was inspired by an earlier piece created for Dr. Barbara Tversky’s class on cognition and drawing – shown below (which in turn referenced the two alternate versions of my comic A Cosmology of Ideas).) The choice to make a vertical composition made for a difficult beast to figure out, but I was pleased with how the two parallel ideas came together with the apple striking Newton for inspiration. But I think we ultimately correctly cut it as it was too specific in its focus on sketching (and a certain kind of sketching at that) and strayed from my consistent approach to deal with multiple ideas through metaphor. It worked for a dissertation – but I think it stuck out a bit in the book. In any case, pleased to get to share it here. I’m also including the notes that accompanied it in the backmatter section.

Goel (1995, p. 179), Goldschmidt cited in Suwa and Tversky (1997, p. 386). While not explicitly referenced here, but implicit in the visuals, Fish and Scrivener (1990) suggest that sketches “contain selective and fragmentary information” (p. 119), “deliberate or accidental indeterminacies that are important to their function,” which “preserve alternatives” (p. 120), and use “denotation systems that include tolerances and indeterminacies in ways that can amplify the artist’s ability to perceive or imagine many options” (p. 117). It’s what Suwa and Tversky (2001) call “constructive perception.” 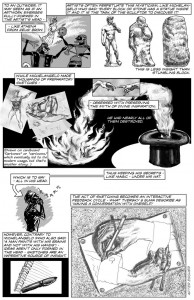 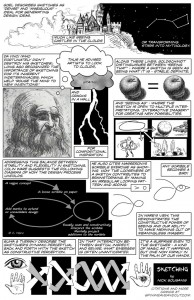 I’ve been really thrilled to learn of some online discussions around Rhizomatic learning (under the tag #rhizo15) that have taken up Unflattening. A few folks have posted visual annotations of my pages as well as video responses to the chapters. Check out Terry Elliott’s close reading here and below, and part one of his quite beautiful and intense video response to Chapter One here and part two here. Kevin Hodgson (whose site is here) also tackled an annotation on my page on multimodality, which I’m sharing below as well. (Both of my actual pages are online, and you can see the page on “Bubbles” here and “Multimodality” along with the process sketches behind it here.) 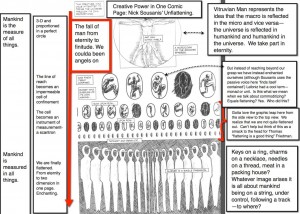 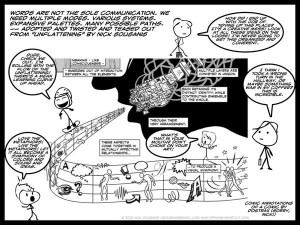 A week or so back, The Calgary Herald ran a large feature interview with me courtesy of writer Eric Volmers. He highlighted my emphasis on making scholarship accessible and the significance of my sharing of the work through the mini-comics giveaways I’ve been making for years. Pleased to introduce the work to my new home here in Alberta! On her blog, celebrated Stanford professor of writing and rhetoric shared some thoughtful reflections on Unflattening. She’s an important leader in reconsidering  what writing is and how it’s taught, and an inspiration to me, so I’m particularly pleased that she found my work meaningful to her own. If you’re looking for more information about the book, see here for a full roundup of reviews and interviews or Harvard UP’s site. 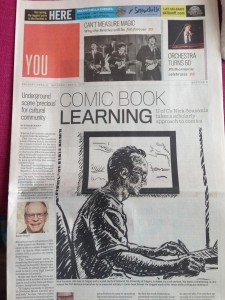 I’ve mentioned before, but want to share again, Professor Steven L. Berg of Schoolcraft College in Michigan has been teaching a course on Unflattening this spring, and sharing student reflections through a wiki created for it. It’s been exciting to see what they’ve taken from it and more so, where they’ve been going with it in their own explorations. Check it out here (now defunct http://scholarlyvoices.org/unflattening/index.html). 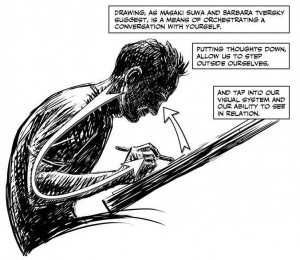 Some travel news, we’re headed back home to Michigan this coming week. While there, I’ll be doing a talk and signing at the legendary independent Book Beat in Oak Park, just outside of Detroit on Tuesday, May 26 at 7pm. It is one of my favorite bookstores ever, and I’m grateful for the opportunity to be back in my hometown to share the work. Info here.
Also, that week, I’ll be at Michigan State University for HASTAC’s conference held there. I’ll be on a panel that follows up from last fall’s #remixthediss conversation that was held at CUNY and hosted by professor Cathy Davidson. It’s an exciting group of digital humanities scholars pushing boundaries on what learning and scholarship look like, and I’m looking forward to reconnecting with them again. In addition to this session, I’ll also be participating in a session exploring the Future of Text, alongside Peter Wallis and Jenae Cohn. Among other things, I’ll be taking participants through a quick comics-making exercise as part of our larger set of activities for the session. Should be fun! Thanks for the support! – Nick
Share this post
FacebookTwitterPinterestGoogle+LinkedIn