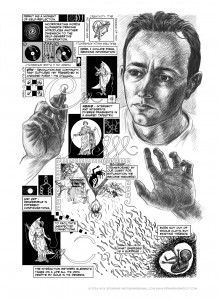 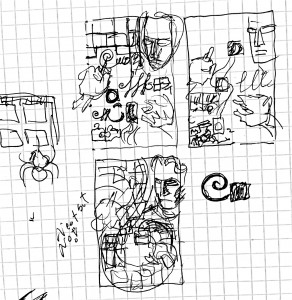 Unseen art – a deleted scene from Unflattening! I’ve been asked frequently how the published version of Unflattening differs from the dissertation. After I defended, I submitted the work to HUP and went up to Cambridge to work with my wonderful editor Sharmila Sen. We trimmed text throughout to tighten it up and keep a consistency of formatting. At that point, I noted some minor changes I wanted to make and later did make in the artwork. Mostly things I wasn’t quite satisfied with and wanted to revisit – only the final page got a significantly changed composition (though the exact subject as in the previous version). And finally, in that marathon session, we ended up cutting two pages – both from Chapter Four. While it’s always hard to let go of these things, especially pages that took a few weeks to figure out and execute, ultimately I think it was the right call. I think they worked on their own, but as Sharmila convinced me – they stuck out from the rest of the narrative flow. And this speaks to the beauty of having a good editor, whom you trust! Even though they didn’t make it into the final work, they were finished pages, so I’m pleased that I can share them here.

This time around, I’m sharing a page explicitly (though metaphorically) about my process itself. It was the only one that I make a direct appearance in, which was something I was never quite sure about doing. It also ties into what I mean by Spin, Weave, and Cut. (You can see some earlier writing about that and development of the logo – by my dad! – in this post from way back.) I delved into DJ methodology, DNA, and weaving – and referenced the three Fates, who spin, measure, and cut (whom I first came across in the pages of Neil Gaiman’s Sandman).

This page had a particularly difficult constraint – trying to weave that logo in – which stretches wide, but still find a way to move the narrative through what became a narrow space in the vertical direction. I struggled. Furthermore, the concept of the page itself  was all about how the creative process generated surprises even to the maker – but it’s hard to surprise yourself when you’re trying to design a surprise! It happened that in the midst of working through this, we went for one of the earliest ultrasounds of my daughter at T-5 months (whose feet are in the dedication!). After coming home from that, I made a quick sketch of what I’d seen, and pieces fell into place. (I wrote a bit about that at the time here.) It’s a page I’m mystified somewhat by how it all came together.

A bunch of new reviews this past week:

Brilliant, insightful discussion of Unflattening on the BookLab Science Podcast. Cohost Amanda Gefter describes it not as a text where metaphors are used to describe science, but as using “science as a metaphor for deeper understanding” (Unflattening is discussed last 15 minutes of podcast). She also highlighted the page about my dog, which always makes me pleased… 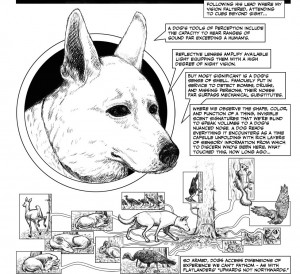 Lovely review of Unflattening by writer Matt Finch in the Brooklyn Rail! I thought he made wonderful points about the book as an educational piece and how it prompts the reader to make explorations of their own. And his closing thoughts revolve around the newborn footprints of my daughter on the dedication page. He writes, “As readers, the author invites us to take our first steps, too: to recognize the many different ways humans have of perceiving, and see the world anew. This is the work of an expectant father, seeking not to limit the future or deny the past, but to unlock doors and invite others to discover their potential.” Yes – I think it’s exactly that. Grateful to have that perspective. See Finch’s review here.
The Comics Spectrum Blog featured an extremely enthusiastic review by Joseph Manuel Nieves. I was particularly moved by this passage from Nieves’s review: “And the more I think about, the more in awe I am of what Sousanis has accomplished here. I’ve never read a scholarly work that elicited this kind of emotional response from me. To be clear, this is a truly intellectual volume, one which earned its author a PhD in education, but it’s also a very stirring work of art. How many PhDs can say that about their dissertations?” Check it out here.
Also, a nice mention in an article by Álvaro Pons in Spain’s El Pais. I’m relying on google translate, but the gist of it is a discussion calling for comics to be employed as non-fiction research – and for doctoral work to be conducted in comics form! Pons raises prominent examples of comics outside the academy including Spiegelman, David B., Bechdel, Satrapi, Sacco, and McCloud – and a nod to Unflattening! In Spanish here.
Review roundup here and more info on Harvard’s site. 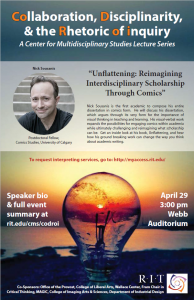 Last week, I was pleased to visit the Rochester Institute of Technology – met with faculty and students doing amazing interdisciplinary work there and gave a talk with a book signing! A real treat all around.

Down the road: On May 26, I’ll be doing a book event at the super cool independent bookstore Book Beat in Oak Park, MI just outside of Detroit! It’s a trip home to see family and excited to be able to share the book in a store I’ve spent so much time in over the years and get a chance to see Detroiters I haven’t seen in too long. (My copy of Understanding Comics and Thierry Groensteen’s The System of Comics were both purchased there!)  Info here.