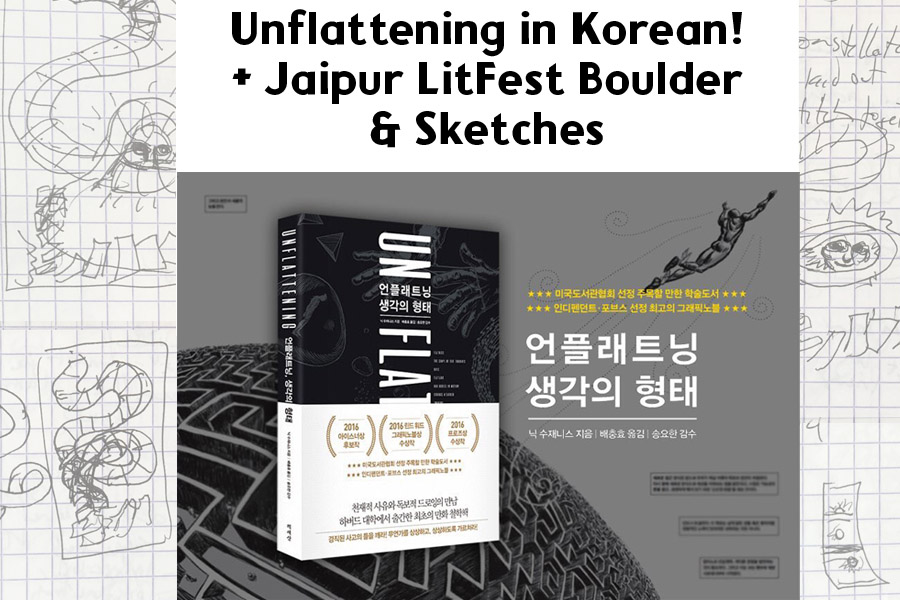 This Friday, I’m off to Colorado to participate in the Jaipur Literary Festival-Boulder at the Boulder Public Library. On Saturday the 24th, I’m on 3 panels:

First up, “Graphic Novels: The Image and the Word” alongside Ms. Marvel’s G. Willow Wilson from 12-1pm. The program reads:

“As the language of digital image challenges letters and text, a new democracy of expression emerges. Nick Sousanis wrote his dissertation in graphic novel format at Columbia University. G. Willow Wilson’s Ms. Marvel is a graphic novel about a female superhero with themes touching on feminism and Islam. In conversation with translator and abstract painter Daisy Rockwell, they examine the interplay of the image and the word, technology and communication.”

Next, “Across Genres” with Margaret Coel and Namita Gokhale from 2:45-3:45pm.

“As canons crumble, genres overlap, and technology enables new narrative strategies, human stories are recasting themselves in new and powerful molds. A panel of daring writers speak of experimenting with different literary forms across languages, conventions and media platforms.”

“What inspires human creativity? How do creative people access their imagination? What are the moments or people that have triggered, catalyzed and inspired them? Memories and meditations on inspirational encounters by a diverse range of panelists.”

Excited to talk with such a diverse group of authors and see where the conversations lead… Details at the Jaipur Litfest site. 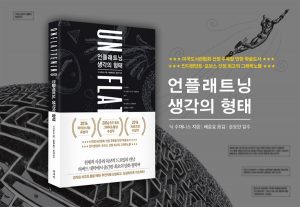 I’m pleased to announce that Unflattening has now been translated into Korean! It’s out in print from the Chaek-Se-Sang Publishing Company. Excited to get my hands on it (and still waiting to hold a French edition which has been out since May!) Some details (in Korean) here and here. Spanish article on research and philosophy taking place in comics with Unflattening – here and in English here.

The Sketch in Practice conference I spoke at this summer has made a video from that cool gathering – posted here. On the subject of sketching, some pages from Unflattening along with progressions of process sketches are now on view at the Denton Arts Center in Denton, Texas as part of the exhibition “Heroes in the Making: The Art of Comic Production” curated by Professor Josh Rose. It runs from September 16 through December 10, 2016. I thought I’d share a few process sketches that I sent down for the show here, and a few more in a subsequent post down the road. This selection includes one of the early roadmaps for Chapter 3, and then the progression of sketches that led to the design of page 61 – which deals with Scott McCloud’s definition and the sequential nature of comics. There’s a lot going on in this page – in ideas and form. The change in seasons as sequential experience of time on the Sorry/game board. There’s a paleolithic lunar calendar – a representation of the passage of time, in space from the dawn of humanity – not all the unlike a comic book, gestalt theory, and more. The page started in a very different direction about the history of comics and such – and that all ended up becoming the prior “Rose” page, whose progression I detailed here. I’m fascinated to watch how these ideas emerge and take shape, even in reflecting on it in my own work. (See more process sequences here.) Thanks! – N 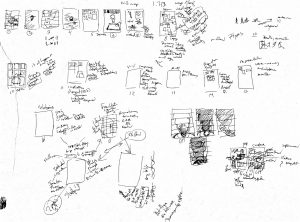 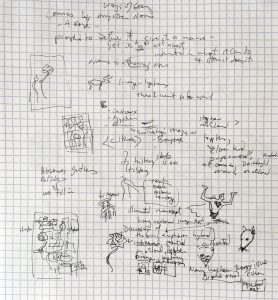 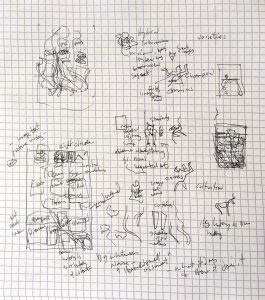 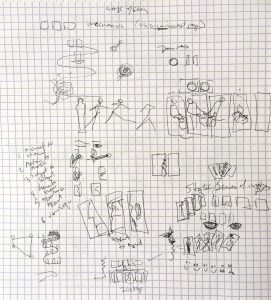 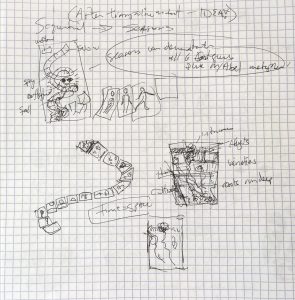 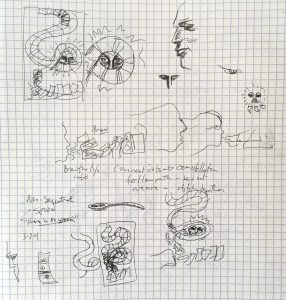 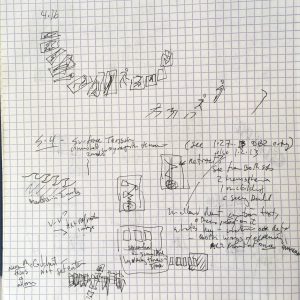