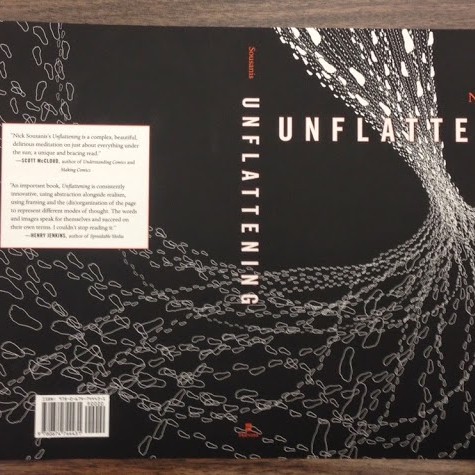 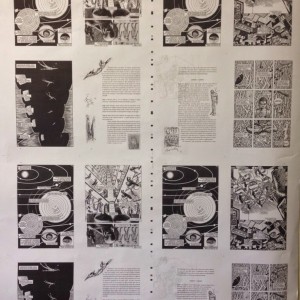 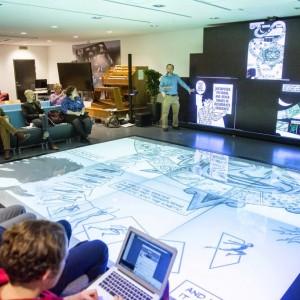 About a month to go to the release of Unflattening! While I’ve yet to see all of it bound in one piece, I was pleased to get my hands on the proof of the cover and test prints for the interior pages! More info on Harvard UP’s site here. (Preorder available at places like Amazon, Barnes&Noble, and Powells, or Chapters/Indigo in Canada – or from your local book store or comics shop!)
In other news, an article I co-authored with professors Anna Smith and Matthew Hall, “Envisioning possibilities: visualising as enquiry in literacy studies” was just published in the journal Literacy. We each shared our individual visualization research approaches toward making sense of literacy and learning. I discussed the way in which my visual creative practice drove my critical work, and vice versa. Specifically, I focused on a page from the dissertation revolving around stories and Scheherazade (on view here), and the research journey my comics making sent me on. A brief excerpt from my portion of the article:

Employing the multiplicity of meaning-making resources that the comics medium affords has greatly expanded the breadth and dimensionality of my (Nick’s) research processes. A brief look at the form: comics function as a kind of network (Groensteen, 2007), braiding together two distinct modes of awareness in a single form – linear, sequential text-like reading (McCloud, 1993) and simultaneous, all-over image-like viewing. These different reading approaches are inherent to the form, and this extends to the specific interaction of words and images, which is described as blended and interdependent (Harvey, 1979), where they exhibit a tension of approaching each other whilst still remaining apart (Hatfield, 2009). It is a multiplicative marriage in which each informs and enriches its partner to produce a resonance (Sousanis, 2012) that exceeds what either can do alone. ….

You can read the entire article online here (for free, i believe). Anna and Matt are terrific educators and scholars doing groundbreaking work using music notation and nonlinear visualizations of time – both approaches that I think will be adopted and repurposed by other researchers in their respective settings. The entire issue of Literacy is devoted to exploring new methodologies, as led by co-editors Anna, Rosie Flewitt, and Kate Pahl. Worth a look! (Also, in publishing, if you missed it my comics article “Threads: A Postmodern Fable” recently appeared in the Journal of Curriculum and Pedagogy’s special issue on Arts-Based Educational Research.)
This week, I had the opportunity to share my work with Calgary poet laureate Derek Beaulieu’s  class on narrative at the Alberta College of Art & Design. I took them through the abstract comics-making exercise I’ve been sharing (you can watch a description of it from my talk at Microsoft here). The comics they produced in about 10 minutes were amazing and Derek was kind enough to share them on his blog here.
Finally, back in December I went to the conference on new genres of scholarly knowledge production hosted by HUMLab at Umeä University in Sweden. The gathering was not only about the modes of production we use, but also concerned with the modes of interaction present in conferences themselves. I had the cool opportunity to present on my work on three wall screens and a giant-sized screen on the floor. I wrote a reflective piece on framing and connecting thinking in comics to the presentation possibilities of this multi-screen format. Here’s a little snippet from that:

… the composing of a comics page can be seen as akin to drafting an architectural walkthrough, in the way that the author is greatly concerned with how the reader moves through the page — from tightly controlled sequencing to allowing for more non-linear flow. Rather than simply being a series of illustrations about ideas, I want the form itself to embody the ideas. The reader’s movements are inextricable from the experiencing of the ideas. I saw the opportunity to present on multiple screens simultaneously as resonant with how I make comics — with the added bonus being that here I could in a way stand in that space. … Decoupling from the standard powerpoint: slide, slide, slide… the multi-screen format mirrors the way in which a comic is significantly different than storyboarding, to which comics are frequently compared. In comics we are concerned with not just what is in each frame (panel), but the size, shape, and orientation of the panel, as well as its relationship to the others around it. This spatialization opens up possibilities for making unexpected connections — we bring together elements with different partners and forge new arrangements. HUMlab-X’s unique staging area let me play with the presentation in a similar manner. …

It was an extremely generative and invigorating conversation overall and an important challenge to how we think about how we conduct our thinking and how we share it. You can see several of the different participants’ reflections here.
Till soon – Nick
(Oh – and randomly, the comic I made a long while back with science-comics writer extraordinaire and all-around good guy Jim Ottaviani on the creation of the Washington, D.C. Metro, was cited in an article in the Washington Post on the Five Best Brutalist Buildings in DC. Fun to see it still out in the world a bit.)
February 12, 2015
Share this post
Share on FacebookShare on Facebook TweetShare on Twitter Pin itShare on Pinterest Share on LinkedInShare on LinkedIn