The Shape of Our Thoughts

Subtitled, “a meditation on and in comics,” “The Shape of Our Thoughts,” is an exploration of how comics work, what their potential for conveying and exploring meaning is, and a tiny bit on implications for art/and comics education. It’s intended as a journal article and culled from material from my dissertation proposal. As this visual-verbal essay embraces the visual as being integral to our thinking, the work proceeds in form as it does in content. The very compositions of each page function to develop the theorizing that is the piece. I sought to create something that addressed the ideas in its very shape throughout, and in doing so i was led to some places i hadn’t expected to go in the least. Anyhow, enough words… – Nick
(After the pages themselves, i offer some behind the scenes commentary at some of the details inside.) 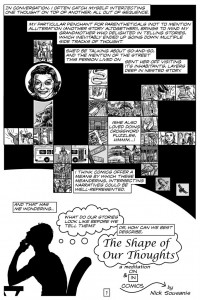 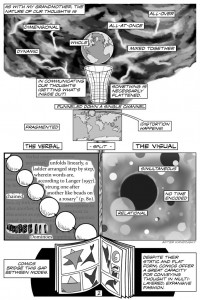 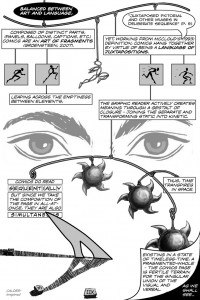 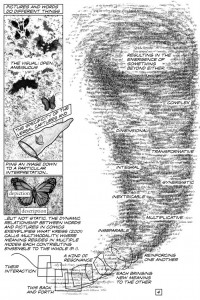 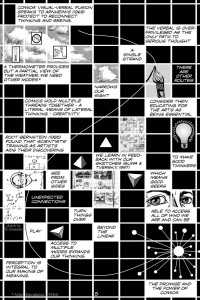 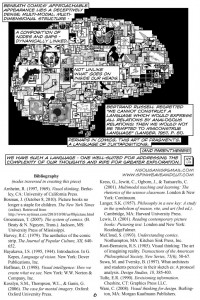 Notes:
P1:
So the story my grandmother “tells” here, is fictional. That is, i can’t remember specifics of her stories but this tries to replicate them in spirit by drawing on elements from her life that are all true, and it could be a day that happened. Some specifics – she walked to catch the bus (my grandmother never drove), and no doubt was greeted by neighbor dogs. My mom and siblings all had beagles, so this is a nod to those, i’m guessing at least one neighbor had a friendly one over the years. Onward, she took me to the Fisher Building in Detroit on occasion, and i know she liked it quite a bit. The “detour” relates to the fact that i’m the biographer of Detroit artist Charles McGee – who ran a gallery there at some point, and i’m speculating on a possible meeting between them. Near Second and Forest Avenues, my grandmother’s father, later her brother, had a shoe supply store – Kanners & Patrize Co (eventually). It’s now the Green Garage in Detroit. I know from my mom, they used to watch the parade from there. Ok, getting to the Detroit Public Library where my grandmother volunteered – helping with wayfinding, shelving, etc. The encounters, including with the red tailed hawk are made up – but possible.

P2: The “comic” pictured on the bottom is a nod to Molly Bang’s “Picture This: How Pictures Work” in which she tells Little Red Riding Hood through geometric shapes and color. I used this as an example to a class of 9th graders in how to tell superhero stories even if you don’t think you can draw – imagine Superman and Batman as loose geometric shapes. Here’s such a story of a world’s finest team-up…

P3: I couldn’t figure out a structure on how to hold a page intentionally fragmented together. In a conversation with my friend Jon, he mentioned an aversion to things Calder (mostly joking). I said, i’d make use of that somewhere. And the next day, it occurred to me this page could be a mobile – static pieces made kinetic.

P4: The resonance between word and image – the tornado is composed of text from the Wizard of Oz when the Cyclone arrives and from a wikipedia entry on the butterfly effect. (I also included the Tempest, but that disappeared by the final version).

P5: Thinking on “lateral thinking” here – i originally had this as 3 or 4 lateral/horizontal strips, but they had so much commonality – i wanted to connect them more directly. I tried this once, thought better of it, woke up the next morning and tried it again, and said why not? (Having spent days trying to figure out how to do it, i can answer the why not much better…) It is intended to be read vaguely upper left to lower right, hitting pieces along the way as one does. The far right column does connect quite directly – but i very purposefully wanted this to be readable in many different ways – to emphasize the point of sketching, of making connections laterally. Also, the math sketches are my dad’s, would’ve liked to show a bit more of that alongside my own sketches figuring out how to make this piece. Another time…

P6: I told my dad about my idea for the final page, and he grabbed the latest issue of Scientific American which had an image of the brain as nodes for the cover. Tied in neatly where i was already going… – That’s it, N