I’ve begun Chapter Two in earnest! Pages are roughed out and starting to assembled finished pages. The first page here is a reworking of a piece i did some time ago called “Mind the Gaps” as a chapter for a book by my advisor Ruth Vinz on narrative inquiry. One side note, in the earlier piece i used the parallax view to show the depth of the Orion constellation. Here because of Perseus’ inclusion in the Chapter prior, i figured out the relative distances of the stars in Perseus.
The second page picks up the theme of parallax and connects it to Eratosthene’s calculation in which he not only demonstrated the world was not-flat, but also measured its circumference quite elegantly. I was familiar with this method from my dad’s physics course, and had wanted to work it in somewhere in the narrative. At some point in playing with ideas, i realized how much it resonated with my working definition of unflattening, and how it could be used to introduce the concept. Anyhow, that’s a bit behind the scenes… – Nick 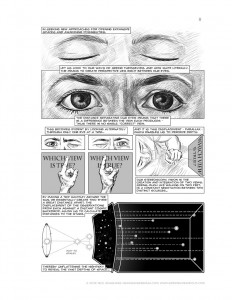 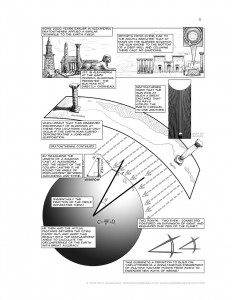