Ok, I haven’t quite finished the chapter when I’d hoped. This page on multimodality kept asking for more thinking, and then more… I finished last week, and was hopeful to finish the remaining two before posting all together, but because of travel (see below) I won’t quite finish them till next week, so posting this solo now. This page follows directly from the page on visual-verbal interaction and brings another dimension to it in addressing the other modes, signs, symbols that comics incorporate to make meaning.
While they’re not mentioned directly on the page, the content draws heavily on the work of Gunther Kress, Carey Jewitt, the New London Group, and more (all of this will be in my annotated appendix). The imagery took a lot of turns along the way – at some point i was drawing all the ingredients for an omelette (that’s another story) – but finally by accident struck upon the confluence between a keyboard and orchestra. The hands arrived as I’d drawn an arrow to move the eye back up from the left sidebar of panels – but wanted something more organic and had previously been thinking of hands on the “keys.” The thermometer, Descartes reference all go back to the opening to this chapter. Anyhow – I’ll leave it at that, except to mention a few other things that prompted ideas. Paul Gravett’s interview with John Miers (UK doc student) on his very cool Score and Script project, and this Russian comic/staff (“Etude No.81, ” by I. Berkovich) – which I didn’t actually draw on, but I really liked it and it served as inspiration so thought I’d share here.

While I was working on this, the Graphixia, Comics and the Multimodal World conference was happening in Vancouver and while following along remotely, I was finding a lot of points of resonance with what I was working on.  Brooke Sheridan did a lovely write up of the gathering here. Also, Roger Whitson shared a preview of his presentation here. As always, this is a low-resolution version of my actual page – so some detail loss happens. 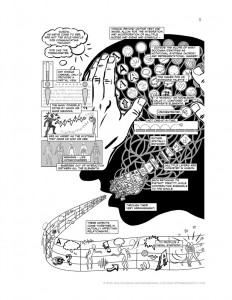 This week, I’m off to Seattle to give a talk and have an exhibition at Microsoft HQ in Redmond, Washington! The exhibition will feature a selection of printed works from the dissertation, as well as digital displays, and I’ll be presenting on the work Friday, June 28. This is a new forum to share the work and I’m excited and grateful for the opportunity. Looking to share pictures and updates when I get back! Thanks for following along, till soon. – Nick 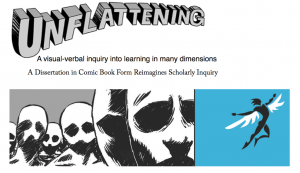