Some teaching resources to share – but first, speaking news! 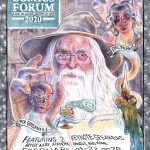 This week I’m off to Michigan State University to keynote (along with the amazing Emil Ferris) MSU’s annual Comics Forum. I’m there for a workshop Thursday February 20, Emil Ferris will be speaking Friday evening, and my keynote will be midday Saturday the 22nd. That day also features a series of panels and roundtable discussions around comics, and I’ll be participating in a panel on educators making comics in their classrooms and their work. If you’re in the area, it’s free and open to the public! Full schedule here.  (Next month, I’ll be doing a similar visit to the UK, keynoting their Transitions Comics Studies conference (along with putting on a workshop, visiting University of East Anglia, and Newcastle/Northumbria University as well…)
Some news – the Chronicle of Higher Education published a nice feature on alternative scholarship and new approaches to the PhD – and included AD Carson (rap dissertation), Amanda Visconti (digital dissertation), and myself. If you’re interested in new possibilities of higher education, or education more broadly, it’s available here.
I’ve been sharing more things from my courses – in the fall I noted that I’d documented EVERYTHING I do in my comics classes. That is all permanently available on the education part of this site. There you’ll find my syllabi, exercises we do in class with student examples, and much more. With the new semester underway, I’ve now uploaded my new drawn and traditional syllabi, which includes a brand new class – Advanced Readings in Comics – a theory-readings course, in which we will be making our responses in comics form. Really excited to see where students go with this, and it’s obviously near to my own work! The drawing for that syllabus was based somewhat on my friend Andy Malone‘s wooden mechanical chess set on the Detroit 1967 Rebellion and a little bit on Philémon by the French artist Fred. I revised the Advanced Making Comics visual syllabus a fair amount, and I really believe that making these is valuable to me and extremely helpful for my students – and so I’ll continue on making, and sharing them. All available here. 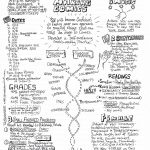 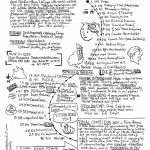 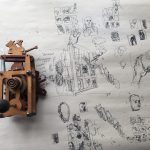 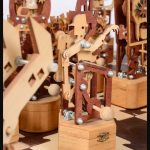 My inspiration in part to make these drawn syllabi and the desire to do more drawing in my classes (in addition to all the drawing I have students do!) comes from my dad’s physics teaching. Responses I get to my syllabi sometimes include – that’s really cool – but it probably won’t work for my sort of class. To that I point to his course assignment sheets, which I’ve included below. And talking about my dad, I also want to share the paper he wrote in 1969 on the Origin of the Moon. Besides sharing with his students each year, it’s sat for 50 years, and each year current theories of the Moon’s origin come closer to what he speculated back then. So I finally went and put it all together and put it up on Medium. A few sketches from it are below, but you can see the whole thing on medium here. It was supposed to be a one-page paper for a master’s course, and it ended up being this creative explosion where all these ideas came together for him. Right or not, the value in the creative process and how the drawings helped him, makes me want to share – and maybe someday make a comic about it… 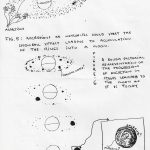 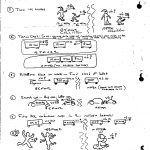 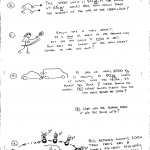 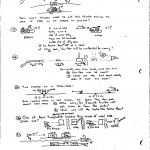 Finally, from my classes, I’ve been gathering various unusual page compositions. A few years back, I collected Hexagonal page layouts, and now I’ve done pages that use Circles as an organizing principle in some way. I compiled a LOT of examples with this one! All viewable here. As a related aside, comics teacher Nicolas Verstappen recently did my non-representational comics-making Grids and Gestures exercise with his students, and then a variation on it where they listened to the story of a woman who had escaped from Syria, and they subsequently made a grids and gestures comic based on the story they hear. You can see what Verstappen and students did here. All the comics teaching stuff is here – and I share a lot of it as I go (with occasional sneak peeks at the new book!) on Twitter…
Share this post
FacebookTwitterPinterestGoogle+LinkedIn