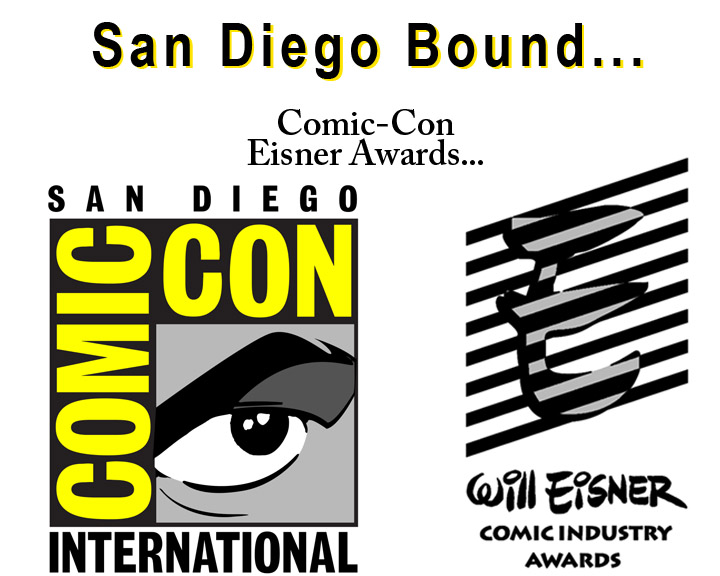 So the end of July came along and my wife, daughter, and I packed up and said goodbye to Calgary after a great year and a half in that sunny city. From the tremendous support of comics scholar extraordinaire Bart Beaty who brought me there to all the friends we made over that time, it was a difficult goodbye. But we are thrilled to be living in San Francisco for the last two weeks, where I’ll be an assistant professor at San Francisco State University in the fall! Look for more news about my courses and comics studies happenings in the time ahead…

This Friday I’m off to San Diego for Comic-Con! I’ve never been, and I’m excited to check out this long-standing mecca for all things comics, and particularly to attend the Eisner Awards ceremony Friday night, where Unflattening has been nominated for Best Scholarly/Academic Work. The show is being emceed by actor John Barrowman and featured presenters include Lynda Barry and Matt Groenig (see details here). Should be a cool night and pleased to be included alongside comics makers for whom I have so much respect. Reception to Unflattening over the past year has far exceeded my expectations, so I’m thrilled to cap it with this event however the voting turns out.

Back in June, I was invited to speak at the National Gallery of Art in Washington, DC. Video from that talk has now been made available on the NGA’s site here, and there is an audio podcast available as well.

At the end of June, I gave a keynote to the conference Sketching In Practice – and had a wonderful time sharing with and learning from drawers, sketch noters, visual facilitators, and people who made and thought about drawing as thinking in all kinds of ways. (In advance of that, I shared all the sketches that went into the making of my piece on entropy for the Boston Globe here.) You can see a Storify of tweets from the conference here, and a wonderful reflection on the gathering as a whole and the importance of working visually by Nicole Armos here. Also, graduate drawing research Suk Kyoung Choi (who gave a terrific presentation at the conference) shared her insights on my grids-gestures drawing exercise, which I had all the attendees partake in at my talk. Have a look at her brilliant piece here. (To see how to do the Grids Gestures comics-making activity, which I conducted via twitter a while back, see here, and here for some of what came out of the collective twitter challenge.)

A few odds and ends, for those who speak German, a pretty in-depth review from their arts journal Progress. Chris Davis’s post on new literacies, which draws on our earlier video conversation around Unflattening, and Caitlin Crawford’s reflections on different forms of literacy in the classroom, which also draws on Unflattening. A while back I gathered observations from those teaching with Unflattening and compiled them here. Feel free to drop me a line if you have used it or are thinking about doing so, would love to hear from you!

And for those of you also going to San Diego – hope to see some of you there! – Nick