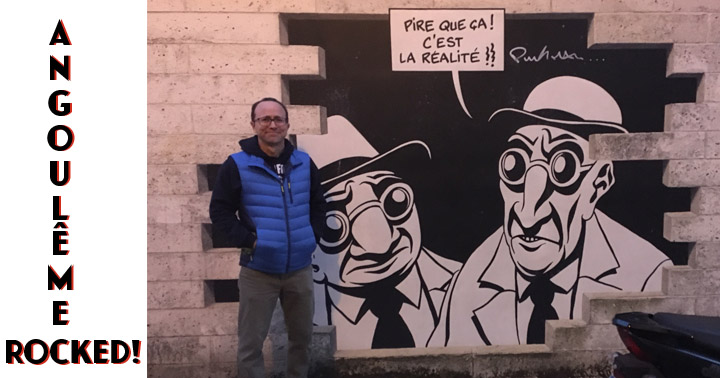 A bit of a gap in updates here – on account of teaching two new comics classes(!) and a new small comics project (much more on all of these things soon).

Back in January, I had the lovely opportunity to travel to France to be a guest of the European School of Visual Arts Angouléme and to attend the 44th Annual Angoulême International Comics Festival courtesy of Actes Sud, the publisher of the French edition of Unflattening! It was an amazing experience all around from great hospitality, to meeting other creators (including one of my favorite authors Marc-Antoine Mathieu and the crew behind the experimental comics éditions polystyrène – whom I happened upon at the festival and ended up buying one of everything at their booth), and readers of all sorts! Awed to be in a place devoted to the creation and study of comics, and a place I definitely intend to visit again. I shared some pictures from it below. I did an interview with a French comics site ondes à bulle that I believe is part of their post here. From there, I went to Athens, Georgia for a keynote for the Journal of Language & Literacy Education Conference “Out of the Box/Into the Margins” and then stayed in one place for a short stretch. Picked up again, mid-March to speak at Harvard MetaLab about scholarship as creative practice for their knowledge design seminar. The next week was local, Diablo Valley College here in California, for a day doing a workshop around Unflattening, and participating in their annual student comics awards. Great event and inspiring student engagement in comics organized by professor and comics author Adam Bessie. This week (April 6-7), I’m off to  the University of British Columbia to do a workshop on making comics and a panel on teaching with comics (and did a virtual talk with students there last month). 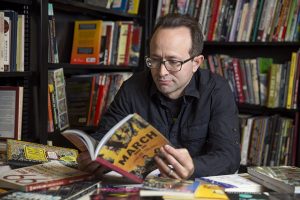 Back in February, San Francisco State University did a really nice profile on me in relation to our forthcoming comics studies minor. (More on the minor here.) Pages from Unflattening were on display as part of the exhibition “Envisioning Pedagogical Inquiry: The Making of Arts Based Educational Research” held at Teachers College and organized by Mary Hafeli alongside the National Art Education Association conference. I had the pleasure of spending time with my editor Sharmila Sen at Harvard Press when I was there a few weeks back, and wanted to share some of her work and words. She gave a talk on the importance of failure and the humanities that was covered here. And also, a really delightful piece on the library she and friends started as children in Calcutta – powerful observations on the importance of libraries and creating your own…

Two years out from publication, Unflattening has picked up a number of new reviews recently. Professor Frances Kelly of New Zealand writing in the Journal of Higher Education Research & Development places Unflattening within the conversation of challenging forms of higher education, a place that the work stems from. She closes the review with the first mention of Garfield (and PhD Comics) in relation to my work!

“PhD Comics is to Unflattening what Garfield is to Hicksville. In this beautiful and complex book, Sousanis grapples with core tenets of Western knowledge: who are our heroes, and why do we valorise their charts and grids so much more than, for example, the oral traditions of Pacific navigators who could read the stars? It is a beautiful book and a complex book that defies categorisation – that’s why I recommend it.”

Ha! (See it in full here (PDF).) Dino Sossi, reviewing Unflattening in the Journal of Visual Studies, emphasizes the connection of my having worked with the late Maxine Greene. (And in the interest of full disclosure, Sossi and I were students concurrently at Teachers College.) He writes:

Sousanis studied with Maxine Greene, arguably the most important educational philosopher since Dewey. Greene spent a lifetime advocating for the moral imperative of arts within traditional educational settings, such as public schools. By incorporating Greene’s sense of aesthetic urgency, Sousanis is also advocating for the fundamental role of the arts not only in education, but also in human development and self-actualisation. On a broader metaphorical level, Sousanis intermingles images with text in a manner that turns these individual modes of expression, as well as the limits of the media, on themselves. He effectively battles the flattening forces that limit the multidimensionality of humanity with a form that is, itself, limited to only two dimensions. Nick Sousanis’s Unflattening is ultimately an important contribution to the wider argument for the place of visual art in traditional academic research and discourse.

You can see it in full (PDF) here. I urge folks to seek out Maxine’s work – and get to know it! (You can see my various comics and reflections on her over the years here.)Cinema Journal’s Gregory Steirer took up Unflattening’s relation to comics studies as a long-form review (with some interview elements) in the Winter 2017 edition of that publication. It covers a lot of thoughtful ground worth having a look in full. (See a PDF of the Review here if CJ’s paywall prevents reading.) A smart review of Unflattening in the up-and-coming literary site Bibli. Writer Jay Butcher called it: “a must-read for any fan of the form. Not only is the artwork beautiful and skillfully rendered, but the actual essay itself changed the way I look at the world” and described the “careful page layouts are another source of joy” – much appreciated! Brazilian scholar Rafael Martins da Costa wrote what looks to be a fascinating essay connecting Unflattening to geography.  (This is in Portuguese, so I had to rely on google translate…) Finally, Lee Konstantinou in the Chronicle of Higher Education, reviews my former supervisor Bart Beaty and his co-author Benjamin Woo’s book of comics studies “The Greatest Comic Book of All Time” and the way it addresses the comics canon. It ends on a surprising note, talking about Unflattening in the context of comics studies. Konstantinou writes:

More intriguingly, Nick Sousanis’s comic-book monograph Unflattening, published in 2015 by Harvard University Press, suggests another possibility. The art form of comics might not be just an object of academic analysis, but might itself become a powerful part of our intellectual tool kit, a way of organizing research and producing scholarship. Cartooning might be a “way of thinking,” as Chris Ware has put it. The art form has a powerful capacity to explain ideas, make arguments, and visualize research. If this path fulfills its promise, comics scholars might someday not only write about comics history — they might also make it.

So Angoulēme is amazing. All throughout the town are comics on the walls by noted French cartoonists. Below is a sequence of images across a wall by the aforementioned Marc-Antoine Mathieu. I knew about this one and still floored to see it. 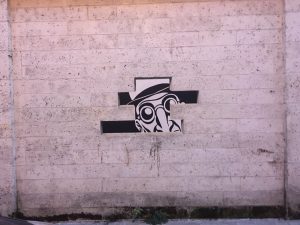 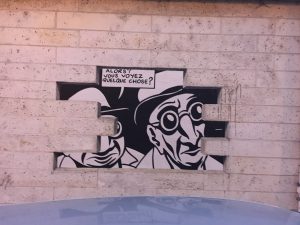 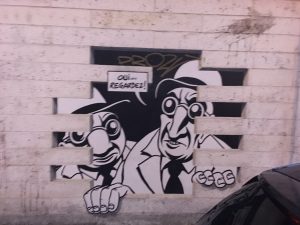 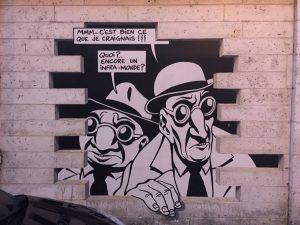 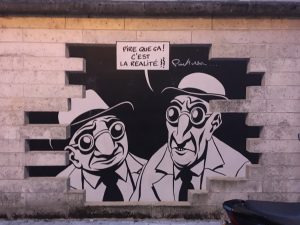 A live collaborative-competitive drawing performance with music. I can’t really do it justice in words – but watching cartoonists draw with each other on stage, respond to one another’s marks, and then pass to a competing team of cartoonists who pick up the story from the previous team’s image was really something. Also picture – a prototype by the amazing Jason Shiga (who was in Angoulême for a residency) of a comic that is choose your own adventure with added dimensions. I picked up nearly all the books at the éditions polystyrène booth and this book “Diagnostic” – all of the things I picked up made some pretty innovative moves in the formal construction of the comics space. Fascinating experiments that I want to learn from and have already been sharing with students. 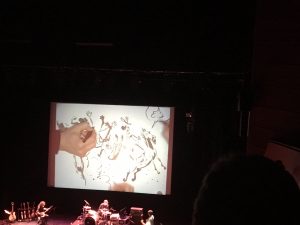 A dedication page and the Actes Sud booth! A wonderful crew all around – really an amazing time and an experience I will always be grateful for. – N 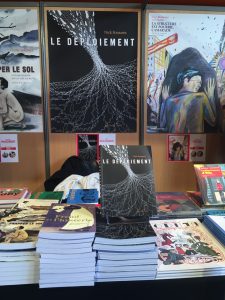