UPDATE: I’m running a #gridsgestures challenge March 17th, as a lead-in to a collaborative comics-making challenge March 18-20th, 2020 (#collabcomics). See details here and be well. – N
UPDATE: I’m running a new Grids & Gestures twitter challenge (#gridsgestures) September 4-7th, 2018! Starting Tuesday September 4th, post your grids and gestures to twitter tagging me (@nsousanis) and the hashtag #gridsgestures through Thursday the 6th. And then for a twist, on Friday, September 7th – let’s flip things around. This time:
Observe some architectural composition around you – a building, windows, a street layout, floor tilings, a dresser, the dashboard of a car, whatever – find one you are inspired by, take a picture of it, then make a single comics page based on the composition of the actual architecture.(Any subject matter, you can now draw things too if you want!) Post both the image of the architectural element and your comic to twitter at the same hashtag #gridsgestures.
Excited to see what folks come up with this time around!
ORIGINAL: When I first started teaching my comics classes at Columbia, I made up this non-representational comics-making exercise I call Grids & Gestures and soon started doing it in public talks. Over the last few years, I’ve found it to be a great way to get people with no prior drawing experience to very quickly start thinking about the spatial considerations comics makers attend to and at the same time, gets them to realize how much they know about drawing that they didn’t know they knew. Several years later, after sharing it with the Tapestry data storytelling conference I ended up decided to offer it as a week-long twitter challenge via the hashtag #gridsgestures where people tagged me @nsousanis. It went over great, and I’ve now set up this dedicated page www.gridsgestures.com for a handy place to begin to collect examples and run future challenges.  (You can see my original post about that here and results from that first twitter challenge here.) Below I offer a quick explanation (with video), but i also wrote up Grids & Gestures as a journal article here, which offers greater detail for those looking to try it in a class or other setting. 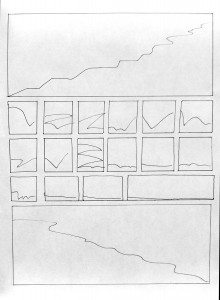 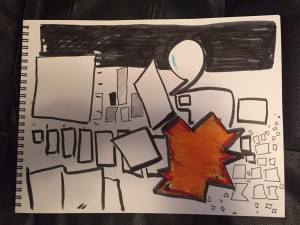 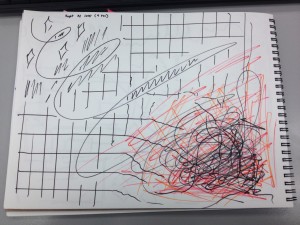 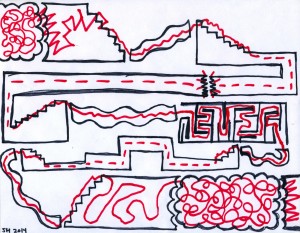 Having briefly thought about this, I want you to take a single sheet of paper (any size, shape will do) and drawing with a pencil or pen, carve it up in some grid-esque fashion that represents the shape of your day. It can be this day, a recent day, a memorable day, or a typical/amalgamation day. And then inhabit these spaces you’ve drawn on the page with lines, marks, or gestures that represent your activity or emotional state during those times represented. The emphasis here is to do your best to not draw things. (You can always do that later!) And also, you can leave space blank on your page – but that has to mean something. This isn’t writing where you can finish a final sentence mid-page. Every inch of the composition is important in comics – so be aware of that as well. Finally, when I do this in class or with groups, I give people about 5-10 minutes to do it, so they have to make decisions quickly. Try to give yourself a similar limit.
I’ve done this in classes as a diary exercise where participants do a new version over several different days, and that’s my thought for doing it here. I’d like to see if people will share their drawings starting Monday April 11 and perhaps, post a new one each day of the week until Friday April 15. We’ll see if visual patterns emerge over the week and if people try different variations from day to day. And for sure, they’ll learn new approaches from seeing what others have tried. Tag it #gridsgestures and feel free to ping me (@nsousanis) as well. (You can email it to me if you don’t use twitter!) Again, you can see the longer, detailed description of Grids & Gestures here, and find examples from my recent class comics as a way of thinking on this page. (As described in the journal version of this, I have participants narrate their comics a bit, and for classes, I have them write a few sentences to share what they were up to in the drawing and why. People are welcome to provide that contextual information as well – though it’s tricky in 140 characters!) I’ve posted a few examples from  below (and earlier examples above), though I recommend not looking at them too much – it’s often better to not have a model to follow to forge your own path. But they’re there if you want… And further down, I’ve put a video of me explaining it. 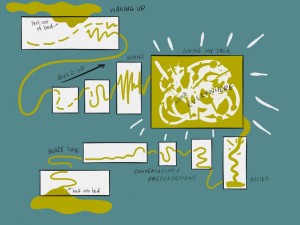 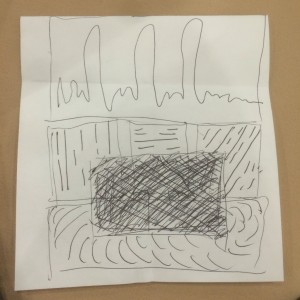 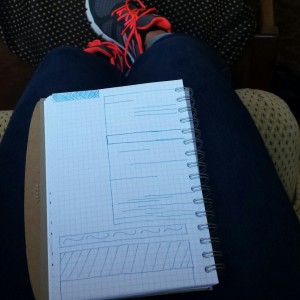 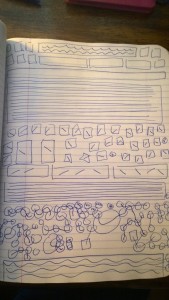 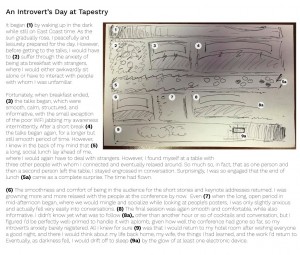 I’ve really enjoyed seeing people’s responses to this over the years and am excited to see it continue! As I develop this page, I’ll probably create a dedicated space for examples I’ve collected over the years (see some from the original twitter challenge here), so stay tuned – and i look forward to variations on it! Thanks – N