So I’m plugging away on drawing Chapter Five, and wanted to share a little preview.  In this excerpt, we make a return to EA Abbott’s Flatland, which was initially introduced in the Interlude between Ch1 and Ch2, and has subsequently been referenced throughout. But I’m using this two-dimensional world here, and the even more bizarre situation of the zero-dimensional realm of Pointland as a way of introducing this chapter that takes up the imagination. You’ll see a call back as well to the earlier definition of unflattening, and the symbol for it, which was first introduced in Ch2, emerging from thinking of Eratosthenes’s calculation of the circumference of the earth.

Also, my recent NYComics Symposium talk, alongside cartoonist and author of Iron Bound, Brendan Leach, was written up by terrific artist Andrea Tsurumi, for the ongoing feature on the symposium on the Rumpus – check it out here. (Past talks here.) It was a great night at the symposium, Brendan’s talk featured live music from the soundtrack accompanying his graphic novel, and I had some of the most engaging questions I’ve had – i’m still thinking about! If you’re in NYC, definitely recommend coming by for a symposium session sometime.

Ok, Chapter Five isn’t going to draw itself, and I need to start on Ch6 in a few days… Onward – Nick 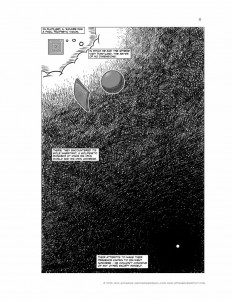 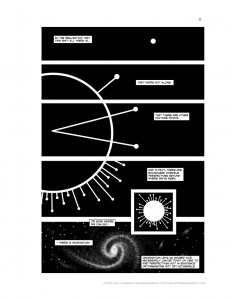