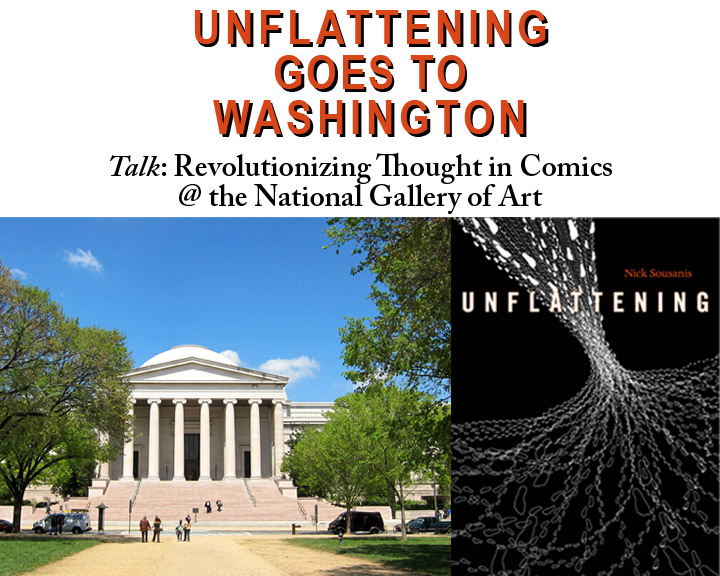 As I announced recently, this Sunday June 12 at 2pm, I will be speaking on my work at the National Gallery of Art in Washington, DC! The talk is titled “Unflattening: Revolutionizing Thought in Comics,” and as with everything at the National Gallery, it is free and open to the public. Reception to Unflattening, even since its life as a dissertation and especially since its launch as a book a little over a year ago, has far exceeded my expectations, and I feel extremely fortunate to have been able to travel all over and meet people and share the work. This feels like a an amazing finale to that run (though it’s not actually the end of it, I’ll be keynoting the Sketching in Practice conference at the end of June and more to come) – to talk about comics in a place with this celebrated collection of high arts that has not seen many comics in its 80 year history. But here we are, and I’m thrilled to be a part of it. I will update this space with more about the event as it unfolds. If you’re in the DC area or know folks that are – send ’em out! Details here.

That reception for Unflattening has also included an Eisner nomination in the category of Best Academic/Scholarly – for which voting is still open to those eligible to do so through June 17(!), the Lynd Ward Prize for Graphic Novel of the Year, and the PROSE award for scholarly excellence in the humanities, among other recognition and media along the way (all press here). It is now available in French as Le déploiement from Actes Sud, it’s being used in classrooms across disciplines and levels, and “Unflattening” as a term is being used by others in different contexts including this conference in NYC this Thursday – Unflattening and Enacting Visualization #critviz2016. I recognize it’s a rare opportunity in life to get to do the work you want, and also have that work open so many possibilities for you. Exceedingly grateful to all for the support along the way. – Nick