In Print!: Mind the Gaps

Another piece sees print this month, this time “Mind the Gaps” (which I first posted here) specifically created for my advisor Ruth Vinz’s (and co-author David Schaafsma’s) text Narrative Inquiry: Approach to Language and Literacy Research. My piece serves as the final chapter, initially a sort of “fable for the future” (as Ruth terms it) as to where narrative inquiry might be headed. I wrote this bit of text to introduce it, some of which made it’s way into the lovely introduction Ruth provides to my chapter:

In extending me this opportunity to contribute this coda of sorts, Ruth and Dave are demonstrating a firm commitment to the path staked out in the text, and an openness to new ways of seeing and re-presenting, an embracing of multiplicity of perspectives that is the future of narrative work.

Narratives are messy, composed of nested, overlapping elements, running in a multitude of directions. While time may or may not unfold linearly, bringing together multiple vantage points results in a dizzying web of complex connections. Comics are a language of juxtapositions, particularly well-suited to convey the richness and depth of non-linear, multi-layered narratives. By holding multiple threads and multiple trains of thought together, comics act as a sort of third-space – a place to let multiple stories and metaphors come together and interact in complex ways, while remaining navigable and readable.

But more than a powerful tool for juxtapositions, comics are a place where the visual and the verbal exist side by side. In comics, the visual is equal partner to the verbal, not illustrative of the ‘real’ thing or mere decoration, but integral to our thinking and our making of meaning. The resonance between visual and verbal modes creates for a higher order space, something beyond either alone.

For this piece I sought to offer a “fable for the future” that emphasized this visual aspect in telling the story from a different angle. As I set forth to unravel what narrative inquiry meant and how best to present it to the reader/viewer, I was struck by the similarities between the process of doing narrative work as Ruth and Dave laid it out and life drawing. Unlike flat, snapshot models of research as “drive-by,” narrative and life drawing convey the dynamic relationships between living beings in their uncertainties and their complexity. And from this starting point, and a lot of play in between, the following piece emerged…

Anyhow, there you have it (in more words than the piece itself!). – Nick 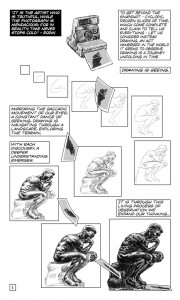 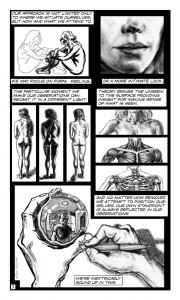 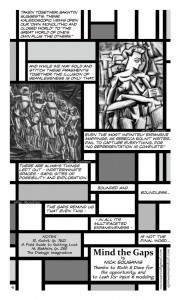