So this week, I’m excited to be (sort of) in two places and specifically two Oxfords at once!

Physically, I’ll be traveling to the annual gathering of the Association for Interdisciplinary Studies (AIS) – taking place this year at the University of Miami, in Oxford, Ohio. At the same time, a small excerpt from my dissertation and a poster about the work, will be my proxies at the 4th International Illustration Symposium at Oxford University in the UK. (Btw, for folks in the UK, I did an interview with Varoom magazine over there recently.)
Both gatherings are around similar themes – and both hew very close to what I’m doing in my work. AIS is focusing on “Integrating Arts and Sciences” and features a keynote by, among others, science writer Carl Zimmer, whose writing I’ve greatly enjoyed. (He also wrote about comics theorist Neil Cohn and the “Charlie Brown effect” for Discover Magazine.) The Illustration Symposium’s theme is “Science, Imagination, and the Illustration of Knowledge.” The program features a strong list of speakers sharing work that crosses borders between art and science.

My poster offers an overview of the terrain the dissertation explores and what I’ll be speaking on, and includes some elements from Chapter Four, on perception and drawing which have not appeared on my site. Additionally, I thought I would repost some links to past pages that thematically tie into these two gatherings. While pretty much all of my work is interdisciplinary in nature, I have done a few specifics pieces dealing with the concept of interdisciplinarity as a process. First for the AIS newsletter, two small pieces, “the importance of seeing double”, and then again for a later issue on “New Maps.” Both of these were later reworked and rewoven as part of Chapter Two of the dissertation and can be seen here.

Also, sharing some of my more science-focused pages, also from Chapter Two – which in its entirety deals with thinking about interdisciplinary processes. I ground my idea on unflattening around parallax and Eratosthenes’s means of calculated the circumference of the earth over 2000 years ago. The change that Copernicus brought by removing the earth from the center of the earth is a pivotal page to the dissertation as well. Finally, from Chapter Three, a page specifically about how comics weave together sequential and simultaneous modes of awareness, as suggested by the work of Iain McGilchrist. Oh, and since I always like to share the page about my dog, from Chapter two about sense of smell as another means of perception.
All for now. Thanks – Nick 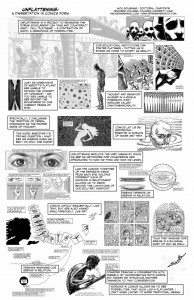